In late October, Regent’s College London will once again play host to the 2012 London Screenwriters’ Festival 2012. The biggest professional screenwriting event in the world will see over 100 speakers present at a series of script labs, speed pitching seminars and networking opportunities. In conjunction with the event, a competition was launched to make a portmanteau feature film called 50 Kisses (2013). You’ve heard of people crowd-sourcing their funding? Well, this is crowd-sourcing an entire movie.

The rules were simple; screenwriters from around the world were invited to submit scripts of up to two minutes in length based around the theme of love, set on Valentine’s night and which included at least one kiss. These would then be made available for filmmakers who had registered an interest to shoot as they saw fit, with the best version of each script making its way onto the big screen as part of the 50 Kisses feature film to be released in UK cinemas on Valentine’s Day, 2013. 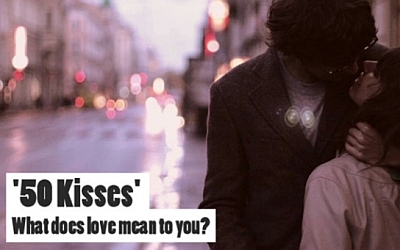 Naturally this has been a major draw for aspiring writers and directors both in the UK and beyond. So much so, that when the closing date for script submissions arrived at the end of June, almost 2000 screenplays had been entered into the competition. The judging panel, which includes Chris Jones (co-author of seminal indie production guide The Guerrilla Film Makers Handbook), have whittled those down to the chosen fifty which are now available to read over on the 50 Kisses website.

Now it’s the turn of burgeoning directors and producers to take up the torch and shoot their two minute masterpieces and with over 1400 filmmakers signed up, it would seem that competition is going to be fierce. Whether or not the final 50 Kisses feature will work as an overall piece remains to be seen, but the organisers have praised the fantastic quality of writing they’ve seen so hopefully the production can match those performance levels.