Following its inaugural outing at Cannes, Brazilian director Walter Salles’ film adaptation of Jack Kerouac’s Beat novel On the Road received its UK Premiere this week courtesy of Film4’s Summer Screen season. Situated in the spacious open-air courtyard of London’s Somerset House, Salles’ alt. road movie garnered mixed reviews from the Croisette’s assorted international press pack, and is unlikely to have won over many new fans after the premiere screening due to its languid pace and markedly stunted performances.

British actor Sam Riley valiantly (or foolishly, depending on your point of view) takes on the role of Kerouac cipher Sal Paradise, a frustrated New York writer who ventures into the great expanses of Americana with the seductive Dean Moriarty (Garrett Hedlund) and his band of merry hangers-on (including Kristen Stewart and Kirsten Dunst). As existential funk leads on to a series of existential fucks, Paradise falls deeper and deeper into Moriarty’s hedonistic world of cheap thrills, hard drugs and generational angst. 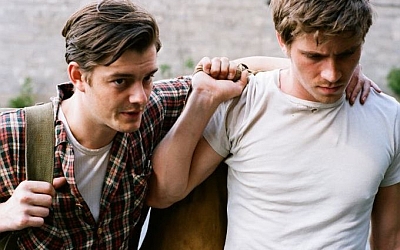 Unlike Salles’ crowning career achievement – 2004’s engrossing and sumptuously-shot The Motorcycle Diaries – On the Road crumbles beneath the weight of its wordy source material, ensemble cast and po-faced presentation. Hedlund is undeniably the stand-out performer, a spontaneous live-wire who swiftly sets up a number of intriguing sub plots that are sadly never fully explored, whilst Riley and Stewart are forced to regurgitate lines upon lines of Kerouac’s generation-defining prose – undeniably a symptom of this adaptation’s greatest flaw. David Cronenberg’s hybridic William S. Burroughs feature Naked Lunch (1991) remains the finest evocation of the Beat era.

Dialogue delivery is one of the all important aspects of any literary adaptation, and at certain points during Salles’ On the Road, one could be forgiven for questioning whether they are in fact listening to an audiobook or radio play rather than a genre-defying piece of transnational filmmaking. We’ve come to expect far more from the majority of talents involved with this fatally-flawed folly, and even contemporary greats such as Viggo Mortensen and Steve Buscemi are shackled to thankless bit-part walk-ons (with Buscemi’s predatory homosexual easily the most problematic).

Salles undoubtedly has an eye for capturing the great outdoors, and On the Road certainly makes the most out of its whirlwind tour of US locales (although Denver, NYC and San Francisco quickly blend into one as Paradises’ voyage takes multiple spontaneous detours). What’s missing throughout On the Road is the social unrest, the sense that these young writers will actually go on to do something with their lives.

As part of the premium service delivered to Cardmembers, American Express handpicks the very best in entertainment, such as Film4 Summer Screen, through its award winning Preferred Seating programme. For more information visit Amex.co.uk/potential.