Ulrich Seidl’s Paradise trilogy began with Paradise: Love (2012), first screened just a few months ago in Cannes. Each film takes as its protagonist one of three sisters, who seem to be at a point of crisis in their lives. For Love, the first sister was on a trip to Africa to find, if not love, at least loving. In Paradise: Faith (2012), Anna Maria (Maria Hofstätter) takes a holiday from her job as a nurse to devote herself to her religious work. Anna Maria’s faith is an extreme form of Catholicism, which involves self-flagellation, proselytisation and a personal devotion to the crucifix and various pictures of Jesus which adorn her pristine, yet antiseptic home. 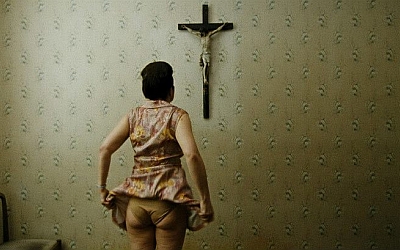 Anna spends her holiday carting around a large statue of the Virgin Mary which she takes to the houses of immigrants and the poor, asking them to pray with her. She is subject to much verbal abuse and slammed doors, but also manages to inveigle her way into some house where the baffled are assaulted by her evangelism. The outside world for Anna Maria is a den of sin, a fear reinforced when one night she witnesses a full on orgy in the local park. Our protagonist takes solace in her semi-erotic adoration of Jesus. However, her world is thrown into disarray by the return, after a two year absence, of her paraplegic Muslim husband, Nabil (Nabil Saleh).

Nabil is hoping to repair their relationship and be cared for by his wife, but she has no space in her life any more for a merely temporal relationship and the two are soon at loggerheads. Seidl’s Faith is a grotesquery of extremes. Austria has a high quota of Catholics, and organisations such as Opus Dei certainly approve of such acts as flagellation. But the ‘faith’ of the title is more like a psychosis, in the same way the ‘love’ of part one had very little to do with most people’s experience of the emotion. By driving to the margins with such gusto, Seidl is in danger of making us untouched voyeurs and his long scenes of humiliating ridiculousness are at once hilarious and inconsequential.

There is something unethical about the laughter evoked by Faith, and one perhaps can’t help but think there is something essentially disingenuous about the entire Paradise project. His second entry provoked much debate with its irreverent view of religion and its scene of real sex, but when it came down to it, what were we really talking about? Perhaps we’ll find out in 2013 with the release of the final part of the trilogy, Hope – let’s hope.