★★★☆☆
Receiving a remarkable (and potentially lucrative) nationwide UK release courtesy of the Cineworld cinema chain – and obviously aspiring to draw in the ‘Polish pound’ – Piotr Mularuk’s entertaining neo-western Yuma (2012) rightly demands your admiration. Whilst its rags-to-riches-to-rags crime saga narrative has been seen innumerable times before, its unique socio-geographical perspective upon the smuggling trade between the German/Polish border adds an extra layer to a somewhat hackneyed tale. Zyga (rising star Jakub Gierszal, named as one of the 2012 Berlin Film Festival’s Shooting Stars) has become disillusioned with the mundanities of life in his small Polish home town. 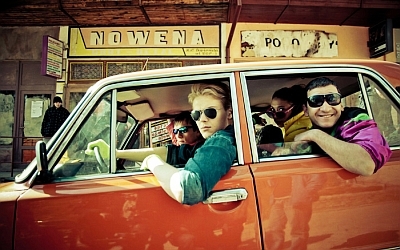 However, across the German border lies a land of wealth and opportunity, offering cheap electronics, stylish fashion and numerous business contacts for any young, aspiring go-getter. With the help of his two nice-but-dim associates, Zyga begins to make a decent living out of ‘yuma’, his terminology for petty crime. However, before long Zyga realises what is happening to him, as money and power overtake his naive dreams of a better life. Gierszal is certainly more believable as a wide-eyed youngster than a Henry Hill-style gangster, but he nevertheless provides the appropriate charm and pathos. Zyga is initially driven by his seeming inability to catch the eye of attractive local redhead Majka (Karolina Chapko). Rumours abound about Majka’s ‘lifestyle’.

One of Yuma’s main strengths lies in Mularuk’s confrontational approach to documenting German/Polish relations. Too often do we see the animosity as simply one-way traffic, yet here the Polish town’s suspicion (and envy) of life over the border is all too clear to see. Within the specific confines of this feature, comparisons can be drawn between the recurrent United States/Mexico dichotomy of the western genre, with Mularuk effectively contemporising the divide for European audiences. Zyga and his posse are effectively outlawed bootleggers, plundering the shopping malls and jewellery stores of their affluent neighbouring nation. Always waiting for his very own 3:10 to Yuma to arrive (Delmer Daves’ 1957 classic is referenced throughout), Zyga cuts a sympathetic, ambitious figure in a two-bit town that had long gone to the dogs. Mularuk’s innovative, yet somewhat stretched film may well struggle to make an impact outside of the UK’s Polish demographic, but it’s not for the want of trying.