Released on DVD for the first time in the UK courtesy of Mr Bongo, Grigori Kozintsev’s big screen adaptation of Miguel de Cervantes’ Don Quixote (Don Kikhot, 1957) has long been regarded as the pre-eminent cinematic version of this literary classic. Beautifully imagined, Kozintsev’s depiction of the illustrious adventures of one of literature’s most beloved figures remains a remarkable example of the monumental achievements achieved during the height of Soviet filmmaking.

With a runtime of just over 90 minutes, Kozintsev’s version of Cervantes’ novel is understandably an heavily-abridged revision of the adventures of Señor Quexana (Nikolai Cherkasov) – a man who has read so many books on chivalry that he deludes himself into believing he is Don Quixote, the heroic knight of La Mancha. However, despite the diminished scale of this cinematic adaptation of such a cherished compendium of stories, the valiant deeds performed by Quixote and his loyal (if not a little naive) sidekick Sancho Panza (Yuri Tolubeyev) remains a thoroughly entertaining experience. 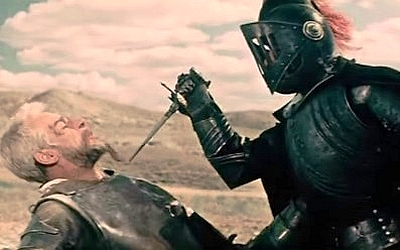 The greatest achievements of Kozintsev’s Don Quixote are found within the performances of Cherkasov and Tolubeyev. Cherkasov, who played such prominent characters as Alexander Nevsky and Ivan the Terrible, perfectly captures the eponymous hero’s outwardly absurd demeanour, yet manages to simultaneously express his character’s honour and nobility, helping to fashion an incredibly affable protagonist. There’s no sly jesting wink towards the camera or attempts to ham up the performance, just an honest portrayal of a man intoxicated with the ideals of chivalry and honour.

Tolubeyev exquisitely compliments Cherkasov’s nuanced approach with his own comedic interpretation of Sancho Panza, with the bumbling and idiotic mannerisms of Quixote’s mule-riding squire adding some much needed comic relief, grounding the film’s inventive flights of fancy in the real world. Soviet Russia can often be perceived as a culturally isolated and repressive era of Russian history. However, whilst censorship may have hindered the artistic temperament of many of Russia’s greatest directors, no such restrictions are apparent here. Filmed in the picturesque location of the Crimea, you’d be hard-pressed to know that the action that unfolds wasn’t filmed against the rural backdrop of the Spanish countryside.

Fabulous set designs and a fantastic attention to detail mark Don Quixote as a tremendous example of how best to adapt from the page to the screen. Succeeding where both Orson Welles and Terry Gilliam failed, Kozintsev not only eluded the curse of Don Quixote but did so in such a remarkably stylish and assured manner. By the end, the Russian director had produced not just an accomplished version of Cervantes’ famously difficult to adapt prose, but one of the finest Soviet era films ever made.