★★★★★
Voted ‘The best French film ever made’ by the prestigious French Film Academy in 1995, the brand new 4K restored version of Marcel Carné’s 1945 classic Les Enfants du Paradis finally makes its way to Blu-ray this week after lighting up the 2011 Cannes Film Festival. An unmitigated masterpiece from start to finish, Carné’s epic love story through Parisian theatreland feels as fresh and effervescent today as it must have done on its initial release, brimming with perfectly-sculpted heroes, villains and wildly imaginative set-pieces. 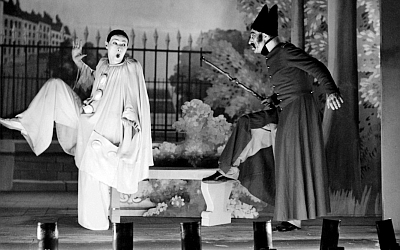 Les Enfants du Paradis (Children of Paradise, to give it its English title) isn’t the sort of film that either audiences or critics simply ‘appreciate’; it’s there to be breathed in, immersed within and savoured for a lifetime. Though comparisons can (and have) been made with such English language leviathans as Gone with the Wind (1939) and Powell and Pressburger’s The Red Shoes (1948), Carné’s sumptuously sweeping saga arguably eclipses both in terms of performance, heart and pure, universally-compelling cinematic drama.

Not one false step is made by any of the film’s ensemble cast, with the central triumvirate of Arletty, Barrault and Brasseur all magnificent in their respective roles. Brasseur in particular is unmissable as the brash-yet-brilliant Lemaître, a down-on-his-luck Shakespeare exponent who finds his way to the top of his profession in both Paris and beyond. Finally realising his dream of playing the titular, jealousy-ridden Moor in a new production of Othello, Lemaître succeeds in contemporising this timeless tragedy in light of Carné’s narrative, with Garance a fitting Desdemona and the shadowy Lacenaire a more than suitable Iago-esque serpent with the most ambiguous of motivations.

Society can be split into two types of people: those who have been enchanted by the delights of Les Enfants Du Paradis, and those who have such wonders to come. Carné may never have equalled his 1945 gem, but the whole point of a masterpiece – in any form of art – is that it remains peerless in its own right. Thanks to this new 4K restoration and subsequent Second Sight home entertainment release, a new generation will be able to enjoy Carné’s classic with the audiovisual clarity it so richly deserves.