Gary Ross’ unexpectedly nuanced adaptation of the first novel in Suzanne Collins’ popular teen fiction series The Hunger Games, starring Jennifer Lawrence and Josh Hutcherson, now looks set to become the foundation of a hugely successful movie franchise. Set in the fictional dystopian nation of Panam, where a central totalitarian state rules over 12 impoverished ‘districts’, The Hunger Games (2012) depicts the titular annual tournament staged to reinforce the Capitol’s authoritarian grasp over the rest of the country.

The Hunger Games are, in fact, a brutal, almost gladiatorial, last-man-standing affair, with each district offering one boy and one girl (decided by a random lottery) up for sacrifice on this televised moral suppressant. When Katniss Everdeen’s (Lawrence) younger sister Primrose (Willow Shields) is nominated for the Games’ latest incarnation, she volunteers as tribute – taking Prim’s place and leading the audience behind the scenes of this barbaric ritual. 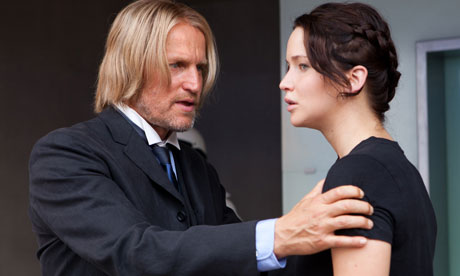 Superbly cast, expertly imagined and deftly shot, Ross’ revision of Collins’ prose captures both the essence behind this futuristic lugubrious society whilst simultaneously tapping into the adolescent temperament of her heroic protagonists. Praise should also be reserved for Lawrence, who adds to her poignant star-turn in Winter’s Bone (2010) with yet another profound and emotive performance. Lawrence captivates both her real and imaginary audience with her meditative and pensive demeanour, magnificently overcoming the fact that most of Katniss’ original narrative derives from an internal monologue.

One element of Ross’ adaptation that was initially met with trepidation was how the story’s violent nature would be depicted within the film’s desired 12A certificate. Often perceived as a Western version of Kinji Fukasaku’s Battle Royale (2000), it seemed improbable that the film could appease the censors whilst preserving the malicious overtones of the novel. However whilst there’s a noticeable lack of bloodshed, the film still manages to install a phenomenal sense of fear and anxiety, with Ross’ clever use of reaction shots and sharp cutaways resulting in the worst conceivable kind of violence – that which you imagine yourself.

Far from flawless, The Hunger Games demands admiration for how it effectively transfers the angst and adolescent confusion of its source material into a tense and absorbing thriller. A beautifully fashioned sci-fi thriller masquerading as a teen adventure, The Hunger Games is not only an assured example of intelligent mainstream filmmaking, but also a stepping-stone for younger audiences towards a new field of cinematic consumption.