Not averse to strapping syrupy bows around tales of incidental contrivance, director Lasse Hallström turns his sunny disposition to yet another literary adaptation in Salmon Fishing in the Yemen (2011), extracting the political satire and blackly comic weight from Paul Torday’s novel. Pairing Emily Blunt with a sober Ewan McGregor may be the sole diamond in this structurally scatter-shot film, but at least Hallström can continue his role as the leading exponent of gregarious, shallow and openly vacuous romantic comedy cinema.

Creating something of a measured groove with Chocolat (2000) and The Shipping News (2001), Hallström here runs with similar ingredients, mixing Simon Beaufoy’s detached screenplay with a tame and affectless treatment of the story. McGregor plays stuffy fisheries expert Fred Jones, whose contentment with a staid life (and similarly uneventful marriage) clashes with Blunt’s workaholic consultant Harriet when her wealthy client, the amiable Sheikh Muhammed (Amr Waked), instructs her with the seemingly impossible task of introducing salmon into the arid waterways of Yemen. 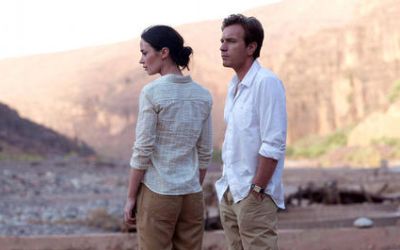 Despite an initial reluctance, Jones soon finds himself warming to both the project and Harriet, his expertise admired by the boundlessly optimistic Sheikh who dispels any scepticism the two may have. Similarly optimistic is the British Government, chiefly the Prime Minister’s spiky press secretary Patricia Maxwell (a terrific Kristin Scott Thomas), who attempts to hijack the mission and use it to construct a positive spin on Afghanistan. Mercifully, Beaufoy’s condensed manipulation of Torday’s novel ensures that the director’s affinity for idyllic vistas and handsomely empty protagonists remains steadily intact.

Although Blunt and McGregor display ample chemistry, their blossoming romance – rather than underscoring the central narrative’s concerns with Anglo-Arab relations – is instead foregrounded, so far that any ‘will they-wont they’ speculation is nullified and drowned out by a sea of indifference. Their sexless, soapy relationship – which, admittedly, retains a somewhat old school charm – is given futile attempts at stumbling blocks, which come in the extraneous form of Harriet’s boyfriend going missing in action while on tour in Afghanistan.

This, as well as a brewing threat from Yemeni activists, would have been emotionally brave narrative crises if it weren’t for Salmon Fishing in the Yemen’s ebulliently twee nature, a meek refusal to comprehend – nor flesh out – the cultural ramifications of the Sheikh’s pet project. They are spun into positive comedic pixels in a glossy surface texture, as is Scott Thomas’ raucous PR bully, whose memorability swims against an inoffensive but ultimately mediocre tide that does precious little with a flood of potential.