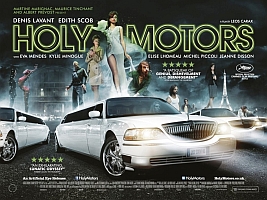 A directorial maverick in the truest sense, French filmmaker Leos Carax returns this year with the much-hyped Holy Motors (2012), his first solo feature since 1999’s Pola X. Once again reuniting with his muse, the chameleon-like character actor Denis Lavant, Carax has created a film of such visionary scope, such off-the-wall humour and such surreal brilliance, that only an auteur of Michael Haneke’s stature could stand between himself and the 2012 Palme d’Or – an accolade which, in another year, Carax may well have won.

Reputedly inspired by the director’s own eccentric fascination with the after-hours life of stretch limousines (well, where else?), Carax’s latest follows the enigmatic Monsieur Oscar (Lavant), who, over the space of 24 hours in the French capital of Paris, adopts the roles of ten other individuals – each one more intriguing than the last. Oscar’s various impersonations  – if one can even go as far as to call them that – include a deadly assassin, an ageing millionaire, a motion capture artist, a troubled parent and the monstrous, anarchic tramp-beast Monsieur Merde (who previously featured in the 2008 anthology film Tokyo!). 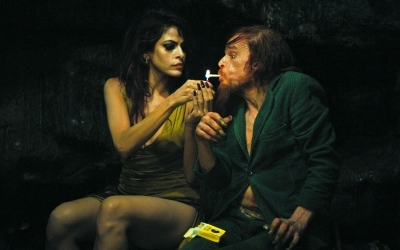 Quite unlike anything else you will see in cinemas this year – or any other year for that manner – Holy Motors is the perfect distillation of one director’s inner-most workings. It’s been said countless times before that a very fine line lies between genius and unadulterated insanity – and that same line is towed throughout Carax’s latest neon oddity. From hallucinogenic scenes of CGI fantasy intercourse to a touching vignette that feels like it could have been lifted from the non-existent sequel to Jean-Luc Godard’s À Bout de Souffle (1960), Holy Motors is near-overflowing with small, enclosed moments of concentrated cinematic brilliance.

The much-lauded Lavant puts in the performance(s) not just of a career, but of a lifetime, perfectly encapsulating and inhabiting each and every one of his subjects with equal zeal and aplomb. Just as the late, great Alec Guinness will (one hopes) forever be immortalised for his schizophrenic turns in the 1949 Ealing classic Kind Hearts and Cornets, Lavant should be reserved the highest praise for this monumental acting achievement. In his notes for the film, Carax even goes as far as to compare Lavant to silent master Chaplin, the latter amongst a small, exclusive shortlist of iconic screen performers who could have filled Monsieur Oscar’s ever-changing choice of footwear.

Carax’s Holy Motors is just the type of wild, audacious arthouse excursion that’s sometimes capable off bridging the great divide between mainstream news-worthiness and out-and-out indie worship. This luxurious position has been, inevitably, boosted by the widely-reported involvement of an impressive, French-spouting Kylie Minogue (channelling Jean Seberg as a melancholic wanderer who has loved – and most certainly lost). Nevertheless, once locked in for the ride, unsuspecting audiences may well find themselves altered – or at very least challenged – by this incomparable, existential odyssey.