As Republican candidate Mitt Romney continues to dominate press headlines for all of the wrong reasons, it seems like very pertinent timing for Jay Roach’s latest effort The Campaign (2012) to be released here in the UK, with Zach Galifianakis and Will Ferrell squaring up for a comical parody of the American electoral process. Ferrell plays Cam Brady, a Democratic Congressman running for his fifth term in a small North Carolina district, seemingly unopposed. However, Brady’s lack of professionalism – and rather adulterous lifestyle – ultimately leads to a challenge.

Corrupt businessmen the Motch brothers (John Lithgow, Dan Aykroyd) conspire to put another man forward for the position, and they opt for local tourism director and benign family man Marty Huggins (Galifianakis). The pair – alongside their respective campaign managers Mitch (Jason Sudeikis) and Tim (Dylan McDermott) – then find themselves battling with no holds barred, as a series of mishaps and hapless PR stunts lead to a rather unorthodox and controversial campaign, as the two candidates will do whatever they see fit to secure the position. 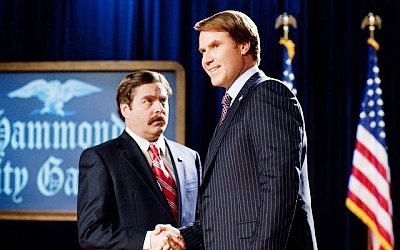 Despite shades of 2008’s Step Brothers – in that it features two grown men acting like children – The Campaign is, however, lacking the same spark and nimble wit, despite coming from the same man who brought us both the Austin Powers and Meet the Parents franchises. It simply feels like a very easy brand of comedy, as jokes about politicians and elections have been done countless times before, therefore appearing too elementary and futile. These situations write themselves really, already amusing in real-life, let alone cinematically.

However this shouldn’t take too much away from a film that is littered with laugh out loud moments, some of which are extremely memorable. A recurring example appears to be Will Ferrell punching things; babies, dogs – you name it, Ferrell punches it. The actor excels in a role that has become somewhat customary for him – that of an unpleasant, narcissistic egotist, which he does pull off rather well. Galifianakis, on the other hand, plays the more likeable of the two, provoking the occasional pantomime “Awww” from the audience. Meanwhile, Uggie – the Palme Dog-winning Jack Russell from The Artist (2011) – puts in what is arguably one of the cameo performances of the year.

The Campaign is more or less what you would expect from such a film; nothing to write home about as such, but it’s harmless and undemanding fun, and given the right setting is certainly an enjoyable experience. Just don’t expect to leave the cinema with split sides, and you’ll avoid any potential disappointment.