Joe is charged by his shadowy present day employers with disposing of those troublesome individuals that the mob overlords of the future are better off without. One day, Joe’s retirement day arrives, wherein he is asked to complete his contracted cycle (his ‘loop’) and kill his future self. However, things are never as straightforward as they seem, and Joe’s older incarnation (Bruce Willis) manages to escape – with potentially cataclysmic consequences. 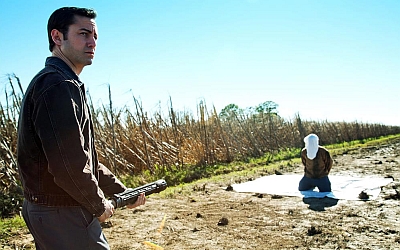 With the help (or hindrance) of a prosthetic nose and CGI-rendered brow, Levitt does more than a decent job of play-acting as a youthful Willis. Unfortunately however, Johnson’s overloaded script leaves little room for the its star man to flesh out his contract killer character. After an intriguing – and well-paced – opening 30 minute salvo, Joe is lumbered with protecting sassy single mother Sara (Emily Blunt) and her young son Cid (Pierce Cagnon) on their anachronistic farm – a narrational shift which, for all its apparent significance, feels more than a little misplaced. With older Joe left to cause havoc in the city, Looper transforms itself into somewhat of a bland, middling drama.

When we do get the odd gun battle or chase scene, Johnson seems to content himself with hackneyed genre tropes (leather trench coats, hover-bikes etc) rather than attempting to create anything vaguely new or distinct. When it eventually comes, the full realisation of the film’s second high concept MacGuffin – an extrapolation upon the fact that a minority of the world’s population has inexplicably developed telekinetic powers – proves fatal, reducing a potentially potent sci-fi thriller into a bizarre ‘demon child’ hybrid.

Johnson is regularly touted – it seems – as a director on the cusp of greatness, but here once again fails to build upon the foundations of his ingenious 2005 debut. For all its promise, Looper is a true film of two parts (halves wouldn’t be quite accurate in terms of narrative focus) – with the second, ultimately, a jumbled genre-clash of misfires and missteps. After the disappointment of Ridley Scott’s patchy Prometheus, it would appear that we’re still waiting on 2012’s first great American sci-fi.