Fresh from the Palme d’Or success of the undeniably bleak and dour 4 Months, 3 Weeks, 2 Days (2007), Romanian director Cristian Mungiu returns to the fray once again with Beyond the Hills (2012), a balanced and observant examination of religion, love and freedom – and perhaps the most thought-provoking and profound film to screen at this year’s London Film Festival. Alina (Cristina Flutur) returns to her childhood community to bring Voichita (Cosmina Stratan) back with her to Germany. The two of them where raised together in the same orphanage, with both of them only ever experiencing love through the bond they shared growing up.

However, on her return Alina discovers that Voichita has found a new love – that of God – and now resides in an isolated monastery just outside of town. Alina, remains headstrong, determined to win Voichita back, however with the love of God immutable, Alina finds herself trapped within this secluded Orthodox community. Mungiu has once again created a truly sumptuous, yet incredibly naturalistic depiction of faith, fear and the absurdity of human behaviour. 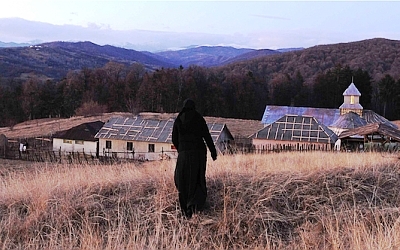 Sparse and strikingly austere, Beyond the Hills is a remarkably balanced re-telling of a peculiar exorcism case that occurred in a Moldovan monastery. However, Mungiu’s latest is never judgemental, avoiding sensationalism by successfully integrating us into this incredibly secular community and allowing us to live amongst them. It’s only at the point that we’re subjected to the arrival of ‘outsiders’ that we really begin to question the actions of this insular community – intelligently arousing an ethical quandary within the audience. Beyond this religious expose lies a hypnotic minefield of ambiguous, yet systematically intriguing themes.

Ostensibly the story of a love triangle between the film’s two exceptional leads (both Flutur and Stratan appear here in their first feature film and are truly deserving of their shared Best Actress award at this year’s Cannes Film Festival), God’s spiritual hold is given a physical manifestation by the community which surrounds them, however their behaviour is left vague and the relationships on screen purposely left unexplored. It’s subtly implied that both girls were abused in the orphanage they grew up in, with Mungiu touching on the lasting reverberations of such events whilst also asking how we can truly be described as ‘free’ when we adhere to such a rigid moral framework as religion. Can we truly be free if we’re guided by someone else’s moral compass?

Mungiu’s Beyond the Hills is a languid, yet surprisingly anarchic journey that grips you from the start and slowly takes you captive with its tragic conflict between the heart and the soul. A beautifully fashioned and enthralling film that through its innumerable themes and philosophical musings resonates with you long after the closing credits roll.