With several awards scooped on its festival travels thus far – including a Tiger Award in Rotterdam – and having being banned in Russia, Serbian drama Clip (Klip, 2012) now arrives at the London Film Festival. The feature debut, both as writer and director, of actress Maja Milŏs, the film is a gritty and sexually explicit exploration of the volatility of modern youth in Belgrade. Following the exploits of a teenage girl, Jansa (14-year-old Isodora Simijonovic), the film takes in the social comings and goings of a group of teenagers in modern Serbia as our protagonist desperately tries to seduce and eventually become the girlfriend of a slightly older local bully, Djole (Vukasin Jasnic).

Through a succession of late night parties and the skipping of various lessons to copulate in the school toilets, Jansa begins to get her man but it is a painful courtship that coincides with Jansa being unable to accept, or even actually acknowledge the fact, that her father is terminally ill. Milŏs’ film clearly wants to take a look at how young people are behaving in modern Serbia and explore what this kind of situation is like for those living it. 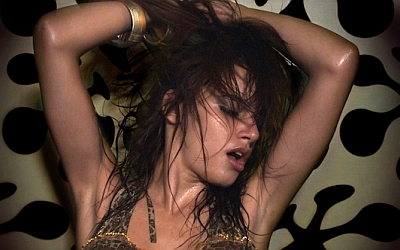 Jansa and her friends drink, do drugs, and have sex in abundance, all whilst giggling about it and hoping that it makes them cool and sexy. The scenes of an explicit sexual nature, which are very explicit and often captured via Jansa’s mobile phone in close-up, represent the reality as far from that. Whilst Milŏs does not look to judge Jansa and her friends, she certainly wants to show the tragedy and destructive nature of their disillusionment and inability to form even the slightest emotional connections with their own families, each other, or their wider society.

Simijonovic is fantastic in the lead role showing her character’s painful inability in accepting her father’s condition or her mother’s love, and escaping into a hazy world of booze and ecstasy. Far from looking for support from her peers, she just wants to forget and essentially presents herself as a trophy to Djole. It is only later in the movie that we see that both may have actual feelings for one another, but their attempts at such alien tenderness don’t work out.

Doubtless, people will be put off by Clip’s explicit sex and the question may well be asked whether it is entirely warranted. However, but much like Jansa’s situation herself, the reality is that the sex is not sexy and the mores of the flesh are cheap and perfunctory when contrasted against the unrealised need to actually connect. The rest of the film never quite soars as high as its lead performance, but Clip is worth a look for that alone and is an interesting addition to this year’s festival.