Unsurprisingly, given its title, the past plays a major role in the debut feature film of Song Fang, best known as the nanny in Hou Hsiao-Hsien’s Flight of the Red Balloon (2007). Gentle, pleasant, and seemingly autobiographical, Memories Look at Me (2012) is an exploration of life, the passing of time, and fatality. To say that it is a film about death, though, gives a suggestion of something much grimmer than this intimate family portrait turns out to be.

With not much plot to speak of, the set up sees Fang (played by Song herself), arriving back at her parents’ (played by her actual parents) home in Nanjing. It feels like something has happened in her life that has forced a return to stay with her folks for peace and comfort, though we never learn of such an occurrence. What follows are a series of close and personal conversations, often between just Fang and her mother, on subjects ranging from the size of the chillies in the garden, to the death of her great uncle. 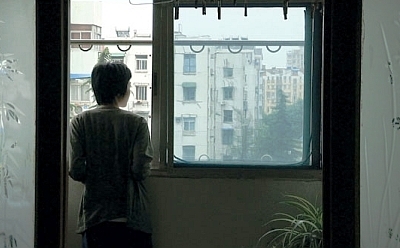 The vast majority of scenes take place in the family’s small apartment – though there is one car ride through Nanjing – and we observe their discussions and Fang caring for her elderly parents in beautifully arranged shots which make us feel like we are eavesdropping. There is no exposition for the sake of it – Fang actually remains a largely silent and unknown quantity – and certainly no drama or plot machinations forced in.

The touching life philosophies of Fang’s family stop the conversations from ever becoming too heavy. They do discuss weighty issues but largely positively, always with such authenticity, and when Fang idly wishes that she were seventeen again, her mother reminds her that she needs to start living in the now rather than looking back fondly on her youth.

Naturally, such languorous filmmaking is not to everyone’s tastes and it is certainly possible to see how some viewers might tire of the next in a long line of melancholic conversations – the title Memories Talk to Me might perhaps be slightly more apt. Having said that, if this simple and minimalistic style is something that you can get on board with then Memories Look at Me is a lovely way to spend 90 minutes.