Japanese arthouse drama The Samurai That Night (2012) is a compelling tale of a young, nervous man who, after losing his wife in a hit and run accident, collapses inward, failing to connect with the world that surrounds him and ultimately becoming consumed with revenge. Directed by Masaaki Akahori – who also wrote the original stage play and adapted the screenplay – this is a tale of subtle beauty and a powerful sense of isolation. From the opening shot of the nauseous and profusely sweating Nakamura (Masato Sakai), the mood of anxiety and dislocation is established.

In the following scene the character greedily gobbles down pots of custard as his wife leaves an answer phone message reprimanding him for his pudding obsession. On the way home she is killed in a hit and run accident in which the culprit flees the scene of the crime. Five years later we find Nakamura in the pits of despair. The answer phone message has become an anchor for Nakamura who, whilst hugging his wife’s old clothes, still guzzles down custard as he listens repeatedly to the message in a darkened room. Failing to move on from the death of his wife he sends threatening letters to the criminal responsible, informing him that he will kill him in an ever decreasing number of days and then commit suicide. 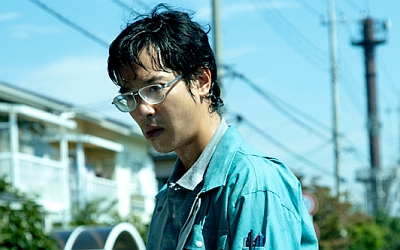 The central story of The Samurai That Night is littered with significant themes that neatly parallel throughout. In many ways Nakamura and the criminal character are a shadow and mirror of each other. Both are lost to the world; one is consumed by grief, the other by a guilt of such ferocity that it leads to scenes where he accepts his identity as a murderer and terrorises people in order to advance his career. Nakamura however withdraws from the world. Attempts by his brother-in-law to set him up on dates end badly, his business is performed at a perfunctory level and he spends his spare time thinking only of his dead wife.

The atmosphere is claustrophobic and oppressive with an incredibly weighty level of emotion which at times makes for very uncomfortable, and not always interesting, viewing. The title is suggestive of the central theme of Bushido philosophy where a samurai must be prepared to die at all times for their master. In a twist on this, the two polar characters are representatives of a form of living death, wherein they perform the actions of their lives, rather than actually living. There is a deep and tragic desire to recapture what it is to be alive, always doomed by their perpetual connection to the death of the woman which has stopped their own living. The more tragic reality is that even before the death of Nakamuru’s wife neither of the characters is connected to life in any meaningful way.

Undoubtedly, Akahori’s The Samurai That Night will struggle to engage mainstream audiences and it’s unlikely to wow those who are more willing to leap into the world of arthouse cinema. Yet this is a film of subtle beauty and tragic isolation – moving, well crafted and undeniably challenging.