From Radu Jude, the director of The Happiest Girl in the World (2009), comes London Film Festival entry Everybody in Our Family (2012). An almost unequivocal critical hit at this year’s Berlinale, this exhilarating Romanian comedy is one of this year’s most enjoyable and perfectly executed inclusions at the LFF. Jude’s film focuses on Marius (Serban Pavlu), a divorced dentist in his late thirties whose life is currently in a state of disarray. He’s about to embark on a trip to the seaside with his five year-old daughter Sofia (Sofia Nicolaescu), however she lives with his estranged wife and her new husband.

When Marius arrives to pick up his daughter he’s told by her grandmother that she’s ill and unable to embark on the journey. Marius, seeing no conceivable signs of illness doesn’t believe her and so begins an escalating series of arguments and name calling which soon get out of control. A rollercoaster ride of sharp humour, childish shenanigans and bumbling police interventions, Everybody in Our Family sounds very much like a shoddily made sitcom commissioned to fill the barren mid-week late-shift of a poorly viewed digital channel. However, behind its slapstick façade lies a far cleverer and nuanced comedy, with as much heart and intellect as any other example of sincere and thought provoking art-house cinema. 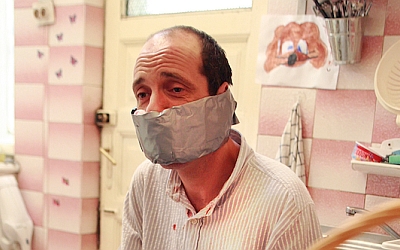 Charted in almost documentary fashion how the fragile and often destructive bonds of a family unit can be inherited in much the same way as hair or eye colour, this frighteningly naturalistic study of human interaction is a fascinating domestic drama masquerading as a delightfully black comedy. Indeed from the initial interaction we observe between Marius and his parents we’re already privy to a sample of the events to come. What begins as a serene meeting, filled with best intentions soon becomes ugly, giving the audience a taste of the chaos which will soon ensue when Maurice comes face to face with his ex-wife and her husband (although they probably won’t expect such a profuse use of gaffer tape).

However, the most fascinating aspect of Everybody in Our Family is how he manages to keep the audience impartial to the events which unfold. Whilst the actions of some of his cast may initially appear psychotic or even severely deranged, the constant tonal shifts and hyperactive camera work implemented by the director means that even as the film reaches a crescendo of absurd violence we still never regard these deeply detestable characters as mere comic foils or excessively melodramatic. Each actor is given an opportunity to present both their character’s positives assets, whilst simultaneously displaying their most deplorable mannerisms.

Tense and unnerving to the point of near complete exhaustion, this chaotic, yet endearing comedy chamber piece makes for compulsive viewing, Everybody in Our Family is a car crash of social taboos and kitchen sink drama with an unrelenting energy and panache.