Fabrizio Federico’s Black Biscuit (2011) is the flagship film of the director’s Pink8 Manifesto – a new movement based loosely on the principles of Dogme 95, but with a stronger focus on improvisation and breaking away from the linear foundations of narrative filmmaking. Black Biscuit’s fractured narrative loosely follows the life of Chet (Federico), a driven but ultimately lost soul who one day finds his true calling is to be a filmmaker. Working as a male prostitute Chet soon finds his dreams slipping away from him as he becomes accustomed to the comfort and money of working – albeit from an unconventional career. 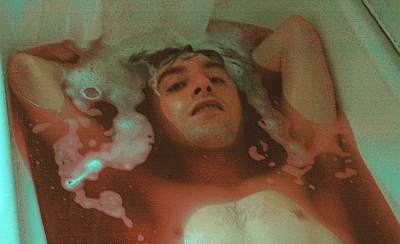 Shot on mobile phones and children’s cameras Black Biscuit is the epitome of micro-budget filmmaking (with a reported budget of only £800). With no money, script or trained actors (using mostly homeless people and prostitutes, with the exception of an ex child ping pong champion) the film’s stripped back aesthetics and production values will alienate most and understandably so, however, behind it’s cluttered façade there lies some fascinating work in this piece of cinematic graffiti.

Made up of a series of raw and uncompromising vignettes, Federico amalgamates strong visual imagery with an eclectic cross selection of music and outwardly sourced monologues that, when done well, creates a hypnotic viewing experience, however, there are numerous moments when it feels like watching a series family home movies after they’ve been torn apart by a disillusioned art student. Sadly at a runtime of over two hours this cluttered collection of images and sounds fails to resonate throughout, more often than not unable to gel effectively and appearing a little too jarring. With a little more restrain Black Biscuit could have become something special, but unfortunately through its frantically shot imagery it fails to make a lasting impression – a fascinating and unusual piece of gutter cinema that’s autistic delivery is unsuccessful in getting its message across.

Aiming to inspire future filmmakers, Black Biscuit’s non-linear approach has already received praise from directors Bruce LaBruce, Harmony Korine and Jonathan Caouette. Undeniably destined to achieve cult status when it hits the festival circuit Federico’s eccentric, ‘enfant terrible’ approach certainly complies to his manifesto by being completely bewildering, imperfect and self-indulgent but does this egotistical direction really matter? Especially when the final rule of Pink8’s manifesto states – the director has no one to answer to but himself.