Setting aside its overall quality (more on that later), emerging filmmaking talent Oliver S. Milburn’s micro-budget supernatural thriller The Harsh Light of Day (2012) deserves substantial praise for its indie production model. Shot for relative peanuts with a cast of unknowns in his home town of Dorset, this week Milburn’s debut capitalises on its recent limited theatrical run with a timely pre-Halloween DVD release, introducing new (and broader) audiences to its unashamedly generic, DIY charms.

Playing out against the backdrop of deepest, darkest Dorset, The Harsh Light of Day begins with a violent and brutal attack upon occult novelist Daniel Shergold (Dan Richardson) and his wife, perpetrated by a masked gang of sadistic hoodies. Left paralysed and effectively impotent by these cruel assailants, Daniel thirsts for vengeance, but soon discovers a new, more horrifying hunger following a timely visit from a shadowy stranger. Overcoming his once-human physical limitations, our protagonist ruthlessly tracks down those responsible for destroying his life – but at a cost. 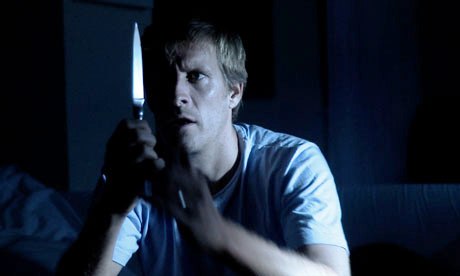 Much like Kieron Hawkes’ far more polished revenge drama Piggy (2012), Milburn’s The Harsh Light of Day does a decent – if workmanlike – job of manipulating its audience’s sympathies in regards to its put-upon protagonist. Richardson is no Martin Compston and his inexperience often shows, but there’s just enough pathos on offer to entice empathy – albeit of the heavily artificial variety. Unfortunately, the rest of the cast often struggle with their respective roles, once again reinforcing – for better of worse – the film’s meagre resources.

As far as narrative goes, it’s still refreshing to see a British horror lift itself above gritty London council estates or zombie-infested boozers. Unfortunately, there’s only so much grace that can be given to a film’s screenplay when the means of realising it are so prohibitively modest. Either for artistic or budgetary reasons, film stock and quality often change vastly from one moment to the next (even within scenes), a jarring aesthetic that’s difficult to look past. Milburn’s is clearly in his element in confined spaces, which can also help cover for low production values, but his pseudo-vampire drama often loses focus where it’s needed most.

Better things are to come from Milburn, and The Harsh Light of Day is far from a disastrous first outing for a young director cutting his teeth. However, with a market as competitive as horror cinema, there’s little room for mistakes to be repeated.