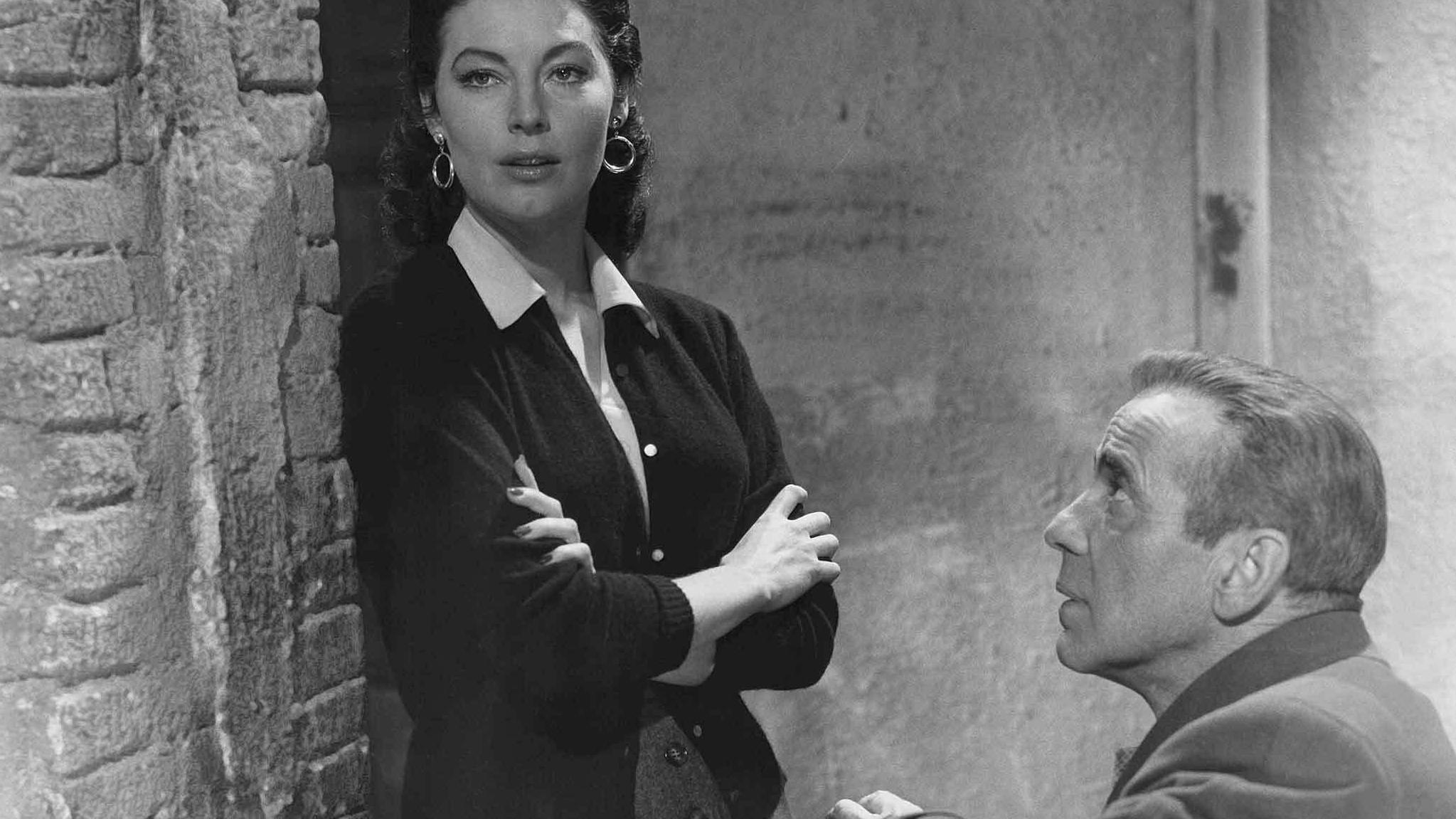 Joseph L. Mankiewicz’s The Barefoot Contessa is at once a deeply satirical depiction of Hollywood and a sumptuous saga of the rise and fall of a star. Short by the legendary Jack Cardiff, the master cinematographer draws from a career spent crafting worlds in opposition: in A Matter of Life and Death, black and white was contrasted with colour photography to create the mortal world and the afterlife; in The Red Shoes, he used movement to fuse imagination and reality, and used intense colour and the dizzying Himalayan mountains to represent the dramatic psychological spaces of Black Narcissus.

Perhaps not as vividly manifest as those films, there are nevertheless two worlds in conflict in Mankiewicz’s film. The rain-soaked graveyard that introduces us to Bogart’s film director is shot in grainy realism, and contrasted against the colourful fantasy land of the Hollywood dream factory. The first act of the film in particular draws continuous attention to is own artifice. Dawes, fully cashing in on Bogie’s trademark world-weary shtick, narrates the evening that first brought him into contact with the doomed Maria, where she is dancing for a living in a Spanish club.

After his egomaniacal producer, Kirk Edwards (Warren Stevens) threatens to ruin him if he doesn’t convince Maria to sign a lucrative contract, the teetotal Dawes tells us that “Kirk was wrong when he said I didn’t know where movies left off and life began. A script has to make sense, life doesn’t. Any self-respecting script would have had me swallow Oscar’s whisky and go off on a bat. But it wasn’t a script”. But of course, it is, and Dawes does convince Maria to return to Hollywood with him, under a moonlit sky, no less, that self-consciously doubles as Maria’s key lighting.

Maria instantly finds stardom in Hollywood. Her life is superficially charmed yet closed in all sides by men who seek to control and possess her. When her infirm father kills her abusive mother in self-defence, she risks scandal to fly to Spain to defend her father, yet finds on her return to America finds even greater admiration. Maria refuses to be controlled by the publicity machine, but each act of defiance is tinged with the pursuit of Hollywood artifice – a fairy tale dream that is forever just out of reach. When she tires of Kirk’s domination, she defiantly absconds with the equally reprehensible Bravano, before leaving him to marry European aristocrat Count Vincenzo Torlato-Favrini. It’s her marriage to the Count that proves the final act in a manufactured romance turned gothic tragedy.

The statue of Maria that Count Vincenzo commissions has something of the portrait in Robert Browing’s poem My Last Duchess: “painted on the wall / Looking as if she were alive” – both ostensibly objects of affection, but which in reality are signifiers of objectification. As the funeral closes out The Barefoot Contessa, the camera lingers on her rain-beaten statue, returning us to the gloom of reality and a testament of Maria’s final commodification.