Greek oddity Alps (Alpeis, 2011) is the eagerly anticipated follow-up to innovative director Yorgos Lanthimos’ critically acclaimed and Academy Award-nominated Dogtooth (2009). Much like his previous outing, the less you know about Alps’ surreal tale the more effective it is, demanding you become immersed into Lanthimos’ peculiar world through a curious fusion of intrigue and bewilderment. The film focuses on four peculiarly mismatched colleagues, collectively known as ‘The Alps’. There’s a young, nubile gymnast, her demanding physical coach, an entrepreneurial paramedic and a caring, emotionally detached nurse.

The Alps work as ‘substitutes’, but not in the conventional sense of the term, with the services they offer in keeping with Lanthimos’ obsession with the mechanics of Hollywood and an inherent desire to escape the hardships of modern life. Needless to say, what occurs is an absurd mix of jet black comedy and uncomfortably bizarre set pieces, which, culminate in a series of madcap events. The films of Lanthimos are instantly recognisable through his actor’s awkward screen appearance and stunted dialogue, a trademark once again realised throughout his new feature. 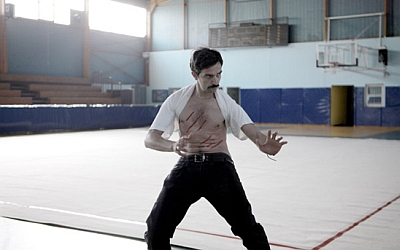 Once again blurring real life with fantasy, Alps successfully captures the ridiculousness of human nature. Whilst Dogtooth was set in an uncomfortably insular world and offered a unique take on the domestic, kitchen sink dramas normally associated with British cinema, Lanthimos’ latest transfers its action into a more identifiable world, feeling strangely cold and ultimately lacking quite the same unique identity. The film’s subtle and grounded plot effectively manages to lure you under its peculiar spell, without ever relying too much on narrative twists to stoke the dramatic fires.

Lanthimos’ provocative and unconventional methods are still here to be savoured. His use of shallow focus allows us to engage with important on screen occurrences, whilst outside the frame the world remains swarmed in absurdity. The most noticeable element of Lanthimos’ Alps is his incredibly unconventional decision to rely on middle distant shots, especially during conversations. This inventive and abstract approach to filming dialogue creates an odd childlike sense of wonder, enhancing the sense of marvel towards the ludicrous actions that take place and leaves the viewer feeling confused but extremely captivated.

Alps stands above a wealth of modern European films through its complex and thoroughly fascinating examination of human nature and escapism from the daunting rigmarole of modern life. This remarkably enjoyable film undoubtedly demands a second viewing – and most importantly, proves that Lanthimos isn’t just a one-hit wonder.