Starring the American Pie franchise’s Jason Biggs and Joel David Moore, director Stephen Gyllenhaal’s Grassroots (2012) is a politically charged, buddy movie adaptation of Phil Campbell’s semi-biographical novel Zioncheck for Presidents: A True Story of Idealism and Madness in American Politics. In 2001, unemployed music critic and amateur political activist Grant Cogswell (Moore) decided to run for a seat on Seattle’s city council, mesmerised by the idea that the city’s ‘majestic’ monorail was the most cost-effective, eco-friendly and aesthetically pleasing solution to the city’s mass transport dilemma.

Assisted by Phil Campbell (whose book the film is loosely based upon and played by infamous pie fetishist Jason Briggs) a recently unemployed columnist with a penchant for investigative journalism that led Cogswell to believe he would make the perfect campaign manager. Grassroots is a film that fails so dramatically to be either funny or hard-hitting that its presence at a number of high profile international festivals was (and is) utterly perplexing. Lacking in imagination or any semblance of heart and soul, this bland and often exacerbating celebration of grassroots politics does little to educate, inspire or even entertain. 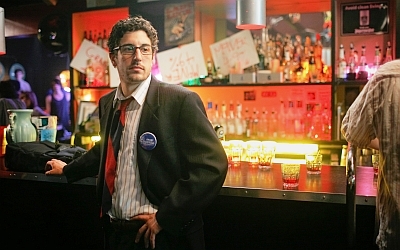 Grassroots is hindered primarily by the presence of Moore as the film’s fervent idealist politician. His insufferable representation of Cogswell as a loud-mouthed, obnoxious snob who worthlessly barks excruciatingly clichéd mantra’s and verbal attacks to those he believes are beneath him, does little to engage the viewer in this almost impenetrable story. The audience is left completely ambivalent to any degree of success his hideously militant approach may reap.

Featuring some hideous moral ideology and heavily manipulative techniques, Grassroots use of the 9/11 terrorist attacks is deeply deplorable, using the emotional effects of this travesty in an incredibly manipulative manner, creating a maudlin sense of emotion the film’s script and poorly constructed characters are clearly unable to replicate. There’s also a heavy handed stab at reverse racism within politics (something clearly influenced by Barack Obama’s successful presidential campaign) and as soon as this hefty subject raises its weary head its clear the film lacks the intelligence and political clout to deal with such a sensitive subject with any sense of decency or aptitude.

This cinematic act of guerrilla warfare on US politics installs a far greater fear towards the far left than Gyllenhaal clearly intended. Indeed, Grassroots is an incredibly unimaginative and painfully dull film – perhaps one of most erroneous entries of the year.