Reputedly based on a true story and adapted from the 2005 hit stage play, Wayne Blair’s comic drama The Sapphires (2012) sees popular Irish comedian Chris O’Dowd and Australian Idol runner-up Jessica Mauboy combine in this feelgood, yet flawed period effort. Set at the start of 1968, three young, talented aboriginal sisters (plus cousin) are desperately seeking stardom, despite being stuck in the outback. After a chance encounter with alcoholic piano player Dave (O’Dowd), the girls form ‘The Sapphires’ and enter a local competition which leads the to them playing for the American armed forces out in Vietnam.

Featuring toe-tapping soul tunes such as Marvin Gaye’s I Heard It Through the Grapevine and Sam & Dave’s Soul Man, the musical renditions performed by the female foursome provide plenty of fun and entertainment, as they they embark on their pursuit of fame. The squabbling sister dynamic makes for an engaging, albeit light, family drama, peppered with moments of solid comedy. There is also an attempt at handling issues of race, played out in the presence of their ethnically white cousin, who provides a gentle level of antagonism to the tale in the face of hostility from the forceful and stubborn Gail (Deborah Mailman). 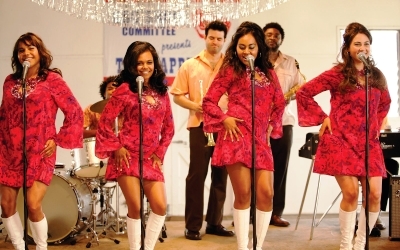 The character of Gail borders on the irritating due to her ongoing antagonism, but ultimately strikes the right note as a love story develops between herself and Dave, with O’Dowd once again in commanding form. The rising Irish star is comfortably behind the wheel as the driving force of Blair’s film, his whisky-sodden performance and passion for soul placing himself as (somewhat bizarrely) as a white Sam Cooke-come-Ray Charles. Regardless, the best lines almost always come from O’Dowd’s charming chancer, whether teaching the girls the ethos of soul or making himself a quick buck or two in the process.

Whilst there is much to be enjoyed here, The Sapphires does fall flat when confronted with more challenging material. The scenes in Vietnam, which attempt to handle the horrors of war, jar with the comic family drama and fun, funky performances. This is also true of the attempts made by Blair to deal with the racial segregation which was rife in 1960s Australia. Similarly, moments of apparent peril during explosions and gunfights are handled with little care and never convey the drama of the situation, culminating in one tiresome hospital scene guilty of employing the cheapest of emotive tactics.

Blair has clearly made sure that his latest effort will appeal to the widest possible market, no doubt hoping to tap into the family market with a taste for the sentimental. It’s also patently obvious that Blair isn’t quite brave enough to make any overt political statements of any weight. Consequentially, the faults of the film (linked to the latter), whilst numerous, are saved in the musical numbers and comedy (the former). The Sapphires possesses all the necessary razzle-dazzle, shimmering sequin dresses and O’Dowd comic riffs to prove popular with audiences in the short-term – whether it actually has any staying power is yet to be seen.