It would be easy to dismiss People Like Us (2012), the debut feature from Alex Kurtzman, as yet another mushy family drama that contains more sentimentality than your average Nicholas Sparks novel. Yet beneath the prolonged stares and hammy piano score lies an enjoyable, emotive drama. Sam Harper (in a winning performance by Chris Pine), is a cocksure salesman living in New York. His boss subsequently threatens to fire him if he doesn’t sort out a work-related mistake, which has lead to an investigation by the FTC. Sam’s life then faces further turmoil when he learns of his music producer father’s death.

Returning home to see his mother (Michelle Pfieffer) with girlfriend Hannah (Olivia Wilde) and late for his deceased pop’s funeral, Harper is summoned to a local attorney’s office to go through his father’s will. Here he discovers that he’s been left a shaving kit bag containing $150k, with a note revealing that his father also had a second family. Adding to this revelation, the note asks Harper to give the cash to “Josh” (Michael Hall D’Addario), who we learn is in fact Sam’s 10-year-old nephew – born of single mum (and Sam’s newfound sister) Frankie (Elizabeth Banks). 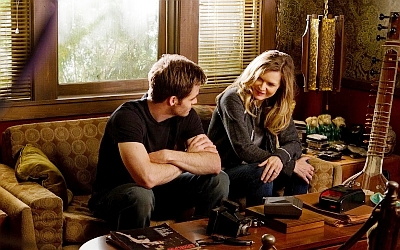 It might seem from this convoluted summary that the problems the characters face in People Like Us seem all too much to believe. Remarkably, Kurtzman’s debut somehow manages to convey and explore its subject matter in a suitably melodramatic manner, aided further by a string of strong performances from its likeable cast of stars.

Of course, there are several niggling problems that threaten to undo such good work. The film’s longish runtime results in the final, emotionally-charged reveal lacking the necessary punch. Equally the brother/sister dynamic walks a thin line, developing into a rom-com-esque sideshow that’s more than a little disturbing given the familial ties.

Nevertheless, there’s just about enough packing into People Like Us to keep mainstream audience’s entertained, especially if you have a taste for previous, arguably inferior Sparks-based melodramas such as The Notebook (2004) and/or The Lucky One (2012). Kurtzman’s inaugural outing is admittedly laced with pitfalls of the genre and its relatively lengthy runtime is certainly against it, but bolstered by a set of amiable performances, this well-handled drama may well find more than a few fans.