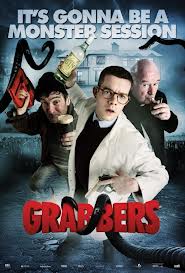 Following its world premiere at this year’s Sundance and substantial positive feedback after its Film4 FrightFest outing, Jon Wright’s slick and entertaining Irish monster movie Grabbers (2012) finally makes its way into a small number of UK cinemas this week with some high expectations to fulfil. Thankfully, Wright’s low budget invasion comedy more than hits the mark, offering fright fans a funny, well-executed mash-up of Jaws (1975), Alien (1979) and a more than welcome dose of Father Ted thrown in for ‘the craic’. Furthermore, with its biggest audience undoubtedly lurking within the home entertainment market, a DVD and Blu-ray release won’t be far behind.

Set on a remote island somewhere off the Irish coast, Wright begins his film with a Jaws-like intro at sea, as something remorselessly picks off the crew of a local fishing boat. Back on dry land the next morning, impetuous Dublin police officer Lisa Nolan (Ruth Bradley) arrives in town for a working vacation, teaming up with raging alcoholic Ciarán O’Shea (Richard Coyle) whilst his superior is away. Unfortunately, whatever attacked the ill-fated fishermen soon finds its way to shore, leaving the island’s inhabitants with just one line of defence against the hostile invaders – to get blind drunk. 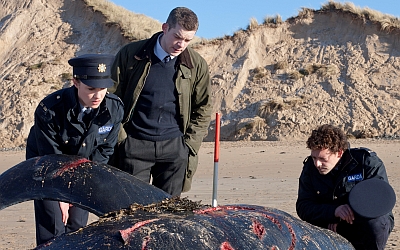 Wright and scriptwriter Kevin Lehane have an inordinate amount of fun playing around with national stereotypes, most of which hinge around the Irish’s reputed affinity for alcohol. Lalor Roddy arguably steals the show as local drunkard Paddy, a lovable cross between Father Jack and James Joyce. Bradley and Coyle are similarly impressive as Nolan and O’Shea – so naturalistic is this central pairing that the two leads’ on-screen chemistry has since been transposed into a real-life relationship. Russell Tovey is perhaps slightly less impressive as aloof marine biologist Dr Smith, but still manages to make the best of a somewhat basic role.

However, the real stars of Grabbers are rightly the titular extraterrestrial creatures themselves. Without given too much of their bizarre biology away, their tentacular squid-like dexterity is matched only by their thirst for warm, untainted human blood. As with the gradual reveal of the gargantuan alien animals of Gareth Edwards’ Monsters (2010), Wright’s grabbers fling themselves in and out of frame in pursuit of their hapless human prey, effectively building anticipation for that first, full horrifying shot.

Despite such a delayed cinema and home entertainment release courtesy of Sony Pictures UK, Grabbers had already set itself apart as one of the highlights of this year’s FrightFest programme and should benefit from such good exposure. Though it seems unlikely at this point in time, Wright’s boisterous, boozy hybrid more than deserves to be placed alongside recent horror-com genre greats such as Shaun of the Dead (2004) and Attack the Block (2011).

Win a DVD copy of Jon Wright’s Grabbers with our latest comp. Follow the link to enter.