Much like Ang Lee’s Life of Pi (2012), Salman Rushdie’s Midnight’s Children (2012) is another Booker prize-winning novel that has been dubbed unfilmable. Whilst Lee’s cinematic adaptation rose to the challenge admirably however, Deepa Mehta’s Midnight’s Children is not as successful in making the leap from page to screen. For those unfamiliar with Rushdie’s novel, we follow the story of Saleem Sinai (Satya Bhabha), who was born midnight on 15 August, 1947 – the moment of India’s independence from Britain. Swapped at birth with the privileged Shiva (Siddharth Narayan), Saleem soon discovers that he is able to communicate with other ‘midnight children’. 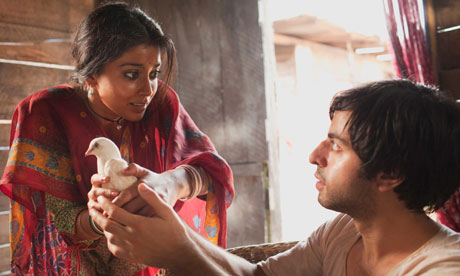 The ‘history lesson’ element of Rushdie’s adaptation is executed well, and Mehta makes sure to depict India’s post-colonial history in a time of great change. That’s about the only positive to take away from this adaptation though; it takes a substantial amount of time for Mehta’s adaptation to get to that pivotal baby-swap moment. The opening 30 minutes – in which we’re introduced to a myriad of characters – moves so fast the audience never begins to care about any of the characters. Much of what transpires is inconsequential to the events that follow, and when you consider the overly long 2 hour 20 minute run time, this becomes especially unforgivable.

There is undoubtedly a compelling story to be found within Midnight’s Children, and the plot line of the midnight’s children themselves is enjoyable and interesting in parts, but the lack of focus means that it feels more like a vignette than the main narrative it perhaps should have been. In trying to juggle India’s history with Saleem’s (and Shiva’s) ever-changing fortunes and many other subplots, the result at times is a disjointed mess. Similarly, the magical realism is an important component that feels shoehorned in as a consequence.

There are a couple of standout scenes towards the end, but for the most part the decent performances from the talented Bollywood cast fail to elevate the lacklustre screenplay. The promotional poster for Midnight’s Children atypically reads that Rushdie is “very happy with this film”. Whether fans of the literary version and newcomers alike will share the author’s view agree is up for debate, but on this occasion it would seem that the book is far more rewarding than the film.