Andy Fickman is one of those filmmakers who seems to have built a career for himself churning out mediocre movies every year or so, and this time around his latest gaffe comes in the form of Parental Guidance (2012), a film about two grandparents (played by Billy Crystal and Bette Midler) whose old school parenting methods are put to the test when looking after their grandchildren for a few days. Even the reassuring presence of Crystal – with his trademark sharp wit and amiable charm – can’t save this one, though he is the difference between this being a terrible film, and one that’s perversely watchable.

Artie Decker (Crystal) is enjoying life working his dream job as a baseball announcer, until he is sacked for being too old, and any self-consciousness felt in such an area is enhanced when he jets off with his wife Diane (Midler) to look after their three grandchildren while their parents Phil (Tom Everett Scott) and Alice (Marisa Tomei) are away on a work vacation. The kids give Artie and Diane quite a torrid time, yet the pair will do whatever they can to form a bond with the children and prove their worth as grandparents, particularly for Artie, who’s determined to impress his own daughter Alice. 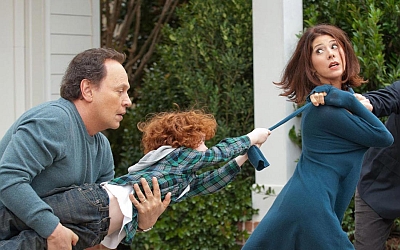 In theory, this picture should appeal to both parents and children alike, as the themes presented are from both ends of the spectrum. You have the perspective of the kids not understanding their grandparents, and then the grandparents not quite understanding the kids, with a steady blend of toilet humour implemented to appeal to the masses. There are also some genuinely poignant themes explored, and Fickman just about manages to avoid unpalatable mawkishness, though some scenes do need to be watched through the crevice in between your fingers. However, although Fickman manages to make this aspect of the film work, it’s the comedic angle where this picture suffers.

Parental Guidance is simply not very funny, which given its attempt to incorporate constant humour, poses quite the problem. There are only so many times jokes about old people not understanding social networking can be funny, if at all. In many ways it feels like a film that has been lifted right out of the mid 1990s and lodged unwittingly into contemporary surroundings. Which ironically is reflective of the film’s main theme. Though, to leap to Artie and Diane’s defence, the technology the kids use in this film would go over the majority of peoples’ heads.

It is very easy to turn your nose up at a film like Parental Guidance, but you have to put yourself in the shoes of the target audience and question whether you’d enjoy this as an eight year old, and the answer is most probably yes. It’s harmless and undemanding and just about manages to keep your attention throughout. However, we’re not eight years old, and this does struggle to appeal to an older audience. It’s everything you’ve seen before, and never want to see again.