Whilst all eyes will soon be glued to Spike Lee’s 2013 US remake of Park Chan-wook’s infamous revenge thriller Old Boy (2003), with Josh Brolin, Elizabeth Olsen and Samuel L. Jackson set to star, the controversial South Korean director has been busy working away on his English-language debut feature, entitled Stoker (2013). Starring Nicole Kidman, Mia Wasikowska and Matthew Goode, Park’s latest is a sinisterly seductive slice of suspense, with an unexpectedly supernatural bravura. During the funeral of her recently deceased father, India Stoker (Wasikowska) meets her Uncle Charlie (Goode), for the very first time.

However, despite a curious attraction to this clandestine figure, the slightly anxious recognition of him by the family’s maid (Phyllis Somerville) and India’s Aunt Gwendolyn (Jacki Weaver) convince India that he’s perhaps not to be trusted. Her mother, Evelyn (Kidman), is far more accommodating, making more time for Charlie than she ever did with India. As the sexual tension between Charlie and Evelyn intensifies, a string of mysterious disappearances begin to occur – culminating in a tense and unbearably taut domestic dynamic that unfolds like an intricate puzzle of suspicion and terror. 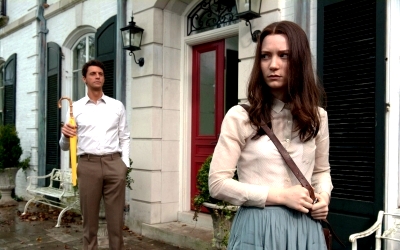 Utilising the aesthetic framework of a teen fiction novella, conceived by a director with a penchant for capturing grotesque malevolence, Stoker transforms this overwrought tale of adolescent empowerment into a Gothic thriller – with the film’s young protagonist mutating from a delicate damsel in distress to a woman of carnal potency. Pulsating with an abundance of sexual energy, Park’s unflinching lens combines his fondness for violence with a skin-crawling soundtrack. It’s arguably the film’s prominent use of synthetic, diegetic sound which allows Stoker to get so far under one’s skin, combining British composer Clint Mansell’s brooding score with some stomach-churning Foley work.

Goode is phenomenal as the mysterious Charlie, both simultaneously captivating and terrifying. However, whilst Goode’s eerie presence fashions a fascinating enigma of a character, it’s the volatile chemistry between Kidman and Wasikowska as two women situated at different ends of their sexual zenith that generates the most fascinating element on display. With India, on the one hand, a prisoner to her own burgeoning sexuality, whist Evelyn is left in the half-light of her fading feminine wiles, the pair’s contrasting biological states culminate in a mesmerising examination of female magnetism.