Veteran filmmaker Barry Levinson makes his best movies at home in Baltimore. His memoirs, Diner, Tin Men, Avalon and Liberty Heights – buoyant with wistful charm and unpretentious fondness – have a personal acuity his non-Baltimore films have suffered without. Now in his 70s, the director returns to his home city – not this time for misty-eyed nostalgia – but for an ecological horror inspired by the environmental problems in Chesapeake Bay. Warm sentiment and quiet smiles give way to sheer terror and deathly screams in The Bay (2012), as Levinson deploys the weary fad of faux-found footage to surprisingly gruesome effect. 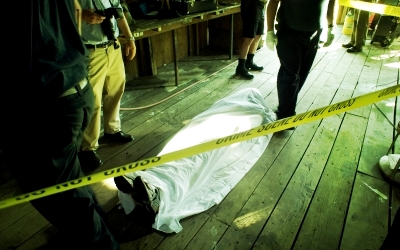 Novice journalist Donna (Kether Donohue) was an unfledged intern covering Fourth of July celebrations in the bucolic seaside resort of Claridge. The sun shone, American flags waved, children paddled and bathers frolicked on the waterfront. On this day of independence however, the town was quarantined. Some of the frolickers came out in a paroxysm of ferocious rashes, blisters and legions resulting in widespread agony and undignified death. Throughout The Bay, Levinson presents an absurd mock-utopia in which the idyllic and macabre coexist. Three years later, Donna uploads a persuasive collection of security and webcam footage, TV news output, oceanographer research recordings, Skype conference calls and spontaneous video from abandoned mobile phones to a Wiki Leaks-style exposé site.

Aping the format of an amateur doc designed for web streaming allows Levinson to engage directly with the human vulnerability that defines our fascination with horror. He even claims that 85% of his film is real – and prompted by phenomenon that could actually occur. However, his suggestion that previously harmless water-based parasites could mutate into an unstoppable flesh-eating scourge of isopods thanks to water contaminated with nuclear waste and tonnes of steroid-rich chicken excrement is hardly any more possible or believable than the amphibious monster from Bong Joon-ho’s The Host (2006) or fantasy fears of ghosts, aliens and zombies.

Senior government officials are notified, and although their incompetency could be predicted, it is hard to believe even they can be this unhelpful or casually flippant when 700 are dead and the infection is spreading. With The Bay, Levinson has made a hypothetical work of citizen journalism about the extremist outcome of environmental neglect. But the thrills do not come from his indictment of politically-controlled agriculture; instead they are from the terrifyingly local impact of the outbreak, the voluminous gore, and the exaggerated terrors that are grounded in shades of realism.