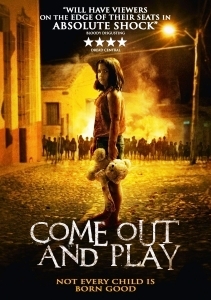 The Belarus-born director of new horror Come Out and Play (2012) is something of an eccentric figure. After a near-death experience whilst shooting a documentary on Huichol shamanism in Mexico, he forged himself a new identity; Makinov (no first name required). He now only appears clad in a red hood, meaning that both the public and his collaborators are left none the wiser about the man behind the mask. With reinvention and mystery vital parts of his new persona, it’s fitting that both elements play a crucial role in his directorial debut, a remake of Narciso Ibáñez Serrador’s cult classic Who Can Kill a Child? (1976).

Whilst on holiday in Mexico ahead of the birth of their first child, Francis (Ebon Moss-Bachrach) convinces his wife, Beth (Vinessa Shaw), to take a boat-trip out to a beautiful tropical island. Despite not having enough fuel to get them back to the mainland, they set out anyway and arrive on their serene refuge only to find it seemingly abandoned. As they drift around the empty dwellings and guest houses they come to realise that despite the enveloping silence, they’re not quite alone – there are unnerving children still living in the desolate township. 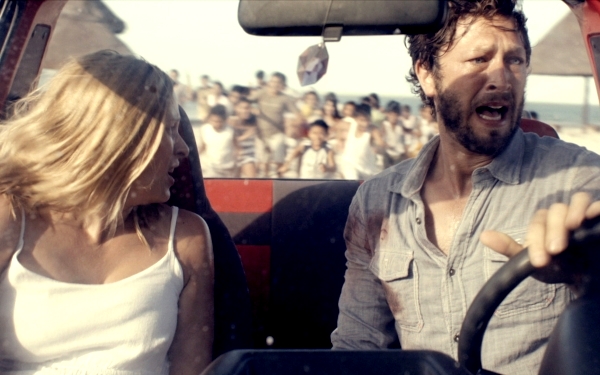 Unsurprisingly, these menacing ragamuffins soon have Francis and the heavily-pregnant Beth fighting for their very survival as they try to uncover where all of the adults have gone. It makes for eerie viewing for the most part, especially as the two tourists wander the sun-drenched streets past closed shutters and vacant housing. With two relatively underwritten characters, however, the film loses its way once the stakes are raised providing uninspired, generic fare without anything to invest in. After some good work setting up the creeping opening with understated performances, the film seems to be an interesting twist on the zombie movie; they’re holed up with an invulnerable foe outside (after all, who can kill a child?).

What the film requires at this point is some meat beneath its generic bones, yet regrettably it just doesn’t provide it. Cheap nastiness undoes the chilling hideousness of the implied crimes and a sequence involving Beth feels entirely out of place and fitting for a more gore-centric supernatural horror film. Makinov himself has spoken, in an oddball viral marketing campaign, about his hatred of the cinema – or “the slaughterhouse of images” as he would label it – and the pointlessness of life.

Makinov’s misanthropic horror sheds all of the context underlying the earlier version of the story, with these children now violent killers for no explicable reason. Perhaps this is an attempt to express the aforementioned meaninglessness of life? Sadly, it just removes the most chilling component of Who Can Kill a Child? and renders Come Out and Play quite meaningless in itself.