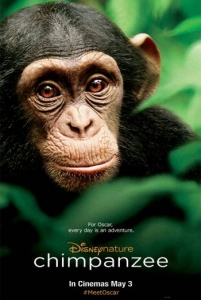 In the ever-watchable Chimpanzee (2012), Blue Planet producers Alastair Fothergill and Mark Linfield transport us to the Ivorian rainforests of Taï National Park, where we are introduced to three-month-old Oscar – a cheeky ape who gains an unexpected ally when he’s faced with more than his fair share of troubles from a rival group of chimps. As is to be expected from a Disney Nature-backed documentary, the tone is light throughout as we witness the daily trials and tribulations of life below the canopy. The level is set (and kept) at ‘pleasingly chirpy’, with a heavy injection of anthropomorphism given to the travailing troop.

American actor Tim Allen’s merry, if at times rather corny narration keeps this rather short, feature-length tale chortling along, referring to the oldest chimpanzee as ‘Grandpa’ and crowbarring in jokes seemingly swiped from his 1990s TV show Home Improvement. At times, this approach results in Oscar resembling something closer to Curious George than a real-life ape. Yet, the film’s handling of chimpanzee behaviour is far from Mickey Mouse in tone. We get to see the darker side of Oscar’s time in the jungle, particularly when another group of chimps move in. 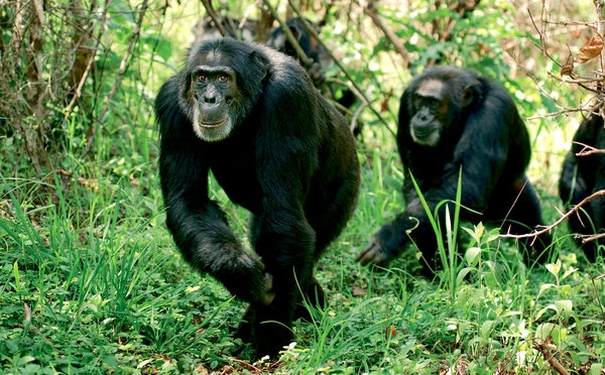 Fights and skirmishes might not portray the bloody battles that go on in the wilds, but tension and a sense of peril are well-established. There’s no avoidance of the cold hard facts, such as when a sombre-toned Allen tells us that chimps “hunt smaller monkeys”. Whilst we never witness the kill, we do see them devouring monkey-flesh as we are pragmatically informed that “this is how nature does it”. Most surprisingly of all is how easily it is to become wrapped up in the furry fellow’s plight. Yes, the bad guy is called ‘Scar’, which feels one step too close to The Lion King, but this is a documentary designed for children – and a far cry from the disappointing, Samuel L. Jackson-narrated African Cats (2011).

Videographers Martyn Colbeck and Bill Wallauer’s luscious camerawork is beautiful to behold, including expansive aerial shots of the jungle canopy, plunging down to the jungle floor below that at night is transformed into a neon-lit world of wonder due to colonies of phantasmagorical fungi. Disappointingly, the remarkable and unusual aspect of ape altruism is glazed over by the narrative, distorting somewhat the uniqueness of little Oscar’s story and how remarkable it is that he managed to survived.

The social dynamics of chimpanzees aside, Disney Nature are doing what they do best here – telling a heart-warming tale. With Fothergill and Linfield’s Chimpanzee, the House of Mouse have crafted an enjoyable, fun tale that might not be particularly scientific in its methods, but could well help to educate a whole new generation in the red-toothed/clawed laws of the Ivorian Taï jungle.