“You are bad guy, but this does not mean you are bad guy!” That’s Zangief, of Street Fighter fame, counselling Wreck-It Ralph (John C. Reilly), the villain of 1980s arcade game Fix-It Felix. A Capcom legend dishing out philosophy? It sounds like an idea programmed for success, but sadly, Disney’s 2012 animation isn’t as brilliant as a hairy Russian giving life advice in tight red spandex would suggest. Ralph, it turns out, doesn’t like being the bad guy. Even after the arcade closes, he’s the outcast of Felix’s (Jack McBrayer) virtual village – thus, he starts hopping between machines to prove he can be the good guy after all. 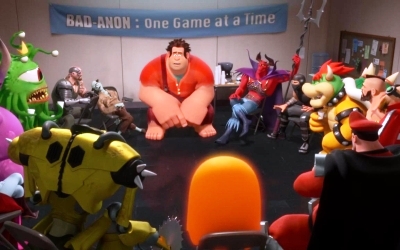 He crashes games such as the bug-hunting FPS ‘Hero’s Duty’, where Jane Lynch’s commander barks orders in sexy high-definition. Never heard of ‘Hero’s Duty’? That’s where Wreck-It Ralph’s problems start. A clear nod to the Halo and Call of Duty franchises, it’s a fictional platform designed to give Ralph a big bad enemy to fight, and to pave the way for the real centre of the movie: ‘Sugar Rush’, a shallow Mario Kart clone ruled by King Candy (Alan Tudyk) and covered in sweets, bright colours and (most telling of all) Mentos and Diet Coke.

The script tries to inject some heart by introducing Vanellope von Schweetz (Sarah Silverman), a glitch in the racing game who, like Ralph, wants to be accepted. But while the feisty Silverman and likeable Reilly share some good banter, the generic ‘accept who you are’ message feels more cynical than sincere – especially when the bugs return for a contrived, commercialised climax.

Gamers are certainly welcoming Wreck-It Ralph as the best video game movie ever. It’s admittedly the most stunning: Futurama and The Simpsons director Rich Moore does a fantastic job with the visuals, nailing everything from the traditional character animations to the old-school sound effects. But the initial smattering of cameos aside (M. Bison, Bowser, Q*Bert, Tapper), this story could take place anywhere. The arcade is just window dressing for a sugar rush of child-friendly product placement.