Film Review: ‘Bring Me the Head of Machine Gun Woman’ 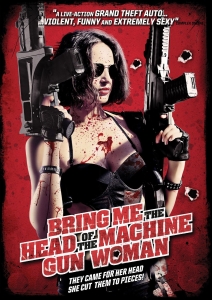 Jean-Luc Godard once remarked that “all you need for a movie is a gun and a girl”, and the director of this tired grindhouse pastiche seems to have taken that advice on board verbatim, offering a sketchy, lifeless shoot ’em up. Like Deathproof and Planet Terror before it, Bring Me the Head of the Machine Gun Woman (2012) starts out with those grainy, distressed film effects before ditching them altogether a few minutes in. Through a horribly contrived set-up, an aimless DJ is forced by infamous gangster Che Sausage (one of the film’s few humorous touches) to track down and kill a scantily-clad assassin. 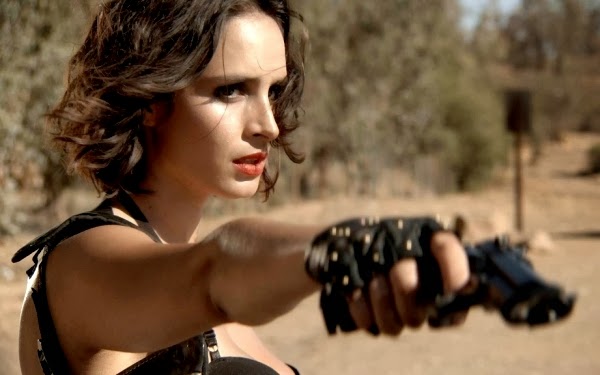 Throughout his journey, the DJ runs into a number of badass types who have their own reasons for getting some payback on the girl. Working to a limited budget, director Ernesto Díaz Espinoza has clearly devoured the works of Robert Rodriguez, but he’s forgotten to inject that same choppy, playful sense of action into his own material. There’s a fun reference to Grand Theft Auto (our protagonist’s favourite video game), but the constant visual motifs riffing off the game run out of steam early on. The firearm-packing female in question (Fernanda Urrejola) looks like a cast-off from Planet Terror, and the intended enigmatic aura of the character never comes across – an issue attributed to the writing rather than the actress.

The rest of the cast is comprised of unmemorable figures, most of who end up as cannon fodder. Perhaps the biggest crime here is that Espinoza doesn’t go anywhere near as far as he could have with the gore (even Rodriguez’s woeful Machete was enlivened by the various acts of dismemberment and body organ-assisted action on display). The gunplay and action scenes lack the kind of lo-fi spark which can sometimes enhance similar cash-strapped genre pieces, and the film’s piercing, intrusive electronic score will have you wishing for an ending in sight well before it actually arrives.

If emerging filmmakers must insist on endlessly reworking the well-worn tropes of seventies exploitation cinema, then they undoubtedly need to bring something else to the table above and beyond just a simple rehash. For an outlandish title which promises so much, Espinoza’s Bring Me the Head of the Machine Gun Woman fails to deliver even the merest hint of ‘guilty pleasure’ enjoyment.

This review was originally published on 27 August, 2013 as part of our Film4 FrightFest coverage.