Coalescing George Orwell’s 1984 with other dystopian texts, cinema has often pondered if orchestrated violence could distract humanity’s inherent hunger for death and destruction. From The Hunger Games and Battle Royale to The Running Man, this simple premise has become a staple of contemporary sci-fi. James DeMonaco’s The Purge (2013) is no different, transporting this theory and distilling it into an annual twelve hours of lawless catharsis where anything – including murder – is legal and just. Set in the brave new America of 2022, unemployment is down to 1% and criminal activity is at an all-time low. 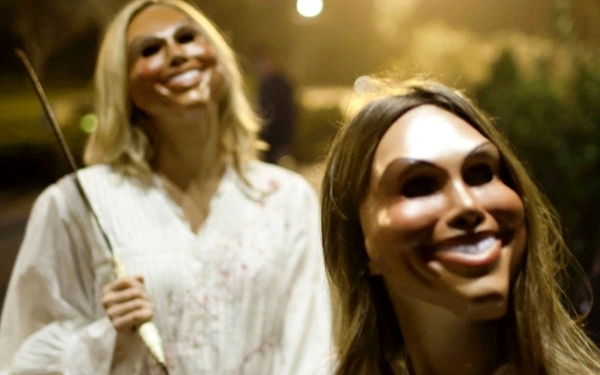 The reason: an annual purge where all criminality is declared non-punishable for a period of twelve hour. Is this to be seen as a time of cleansing that allows society to rid itself of its sins or a yearly cull of undesirables that helps to clean up the streets? Either way, business mogul James Sandin (Ethan Hawke, who always seems to have an eye for an interesting project) has managed to make a lucrative career for himself selling top-of-the-line home security, and can thus afford to keep his family on lock-down in his palatial home-cum-Fort Knox. However, regardless of economic strata or ethnic origin, everyone in this world seemingly has an axe to grind and only one day in which to capitalise on their most malevolent desires.

Taking a fascinating premise and boiling it down into the tenuous motive behind a violent siege of a family home, The Purge is littered with poorly-formed characters and incomprehensible actions. Its initially watertight premise transforms into a narrative with a lot to say, but exasperatingly fails to find the right voice in which to articulate it. As the world crumbles behind the iron shutters of the Sandin household, we’re left to ponder the true affects this purge would have on society whilst we cower in the corner and observe the idiotic blunderings of a stereotypical American family – the ultra-conventional victims of a generic scare story.

With its enticing premise quickly becoming redundant, DeMonaco’s The Purge is little more than a mediocre thriller, its impact diluted by an inability to truly understand either the horror genre or the message the film is pertaining to communicate. What could have been a fascinating study of human behaviour and a reflective allegory for a world becoming increasingly obsessed with reality TV and the suffering of others culminates in a vague and unconvincing attempt at contemplative sci-fi, with neither the intelligence nor fortitude to accomplish its task.