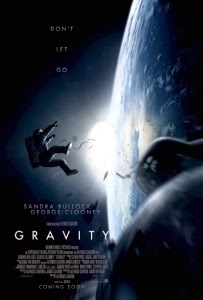 ★★★★☆
Sound and vision combine to momentous effect in Alfonso Cuarón’s Gravity (2013), a grand technical touchstone that the next generation of CGI-reliant blockbusters could and should be measured against. Fortunately, Cuarón’s latest also proves to be more than just a ‘look-at-me’ tech demo for computer-generated visual advancement, grounded as it is by a winning central performance from Sandra Bullock as a Major Tom wannabe adrift in space. Like Ang Lee’s Life of Pi, Gravity blends arthouse sensibilities with big budget polish, whilst perhaps never quite being as stirring for the mind as it is for the senses. 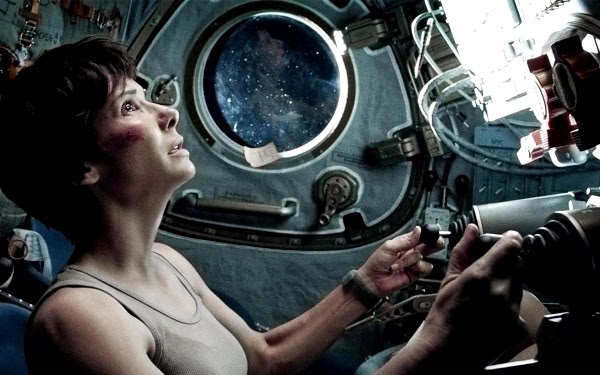 Beginning with a routine space walk as a team of astronauts repair a malfunctioning satellite, we’re quickly introduced to our small cast of characters – among them Bullock’s Dr. Ryan Stone and George Clooney’s smooth-talking Matt Kowalski. It’s not long, however, until events take a sudden turn for the worse as the under-pressure crew are informed by Houston Mission Control (covertly voiced by Ed Harris, repeating his role in Apollo 13) that a cloud of deadly, high velocity space debris is heading straight for them. Bombarded by shrapnel and separated from her colleagues, we’re locked in with a terrified Stone as she desperately hops from station to station in an environment where, we’re told, “life is impossible.”

Cuarón has quietly built a name for himself as an astute directorial chameleon, taking on everything from a dark and difficult middle chapter in the Harry Potter franchise (The Prisoner of Azkaban) to
a near-future, dystopian vision of humanity’s ostensive death throws (Children of Men) with equal enthusiasm and brio. Such is the Mexican filmmaker’s range that Gravity inevitably ends up reminding one most of other esteemed sci-fi opuses, with Kubrick’s monumental 2001: A Space Odyssey and Tarkovsky/Soderbergh’s Solaris obvious comparison pieces. In such prestigious company, Cuarón’s own meditative offering can’t help but feel a little lightweight, and its reverence to Kubrick in particular occasionally gets the better of it, with one umbilical-entwined Bullock foetal position arguably one too many.

Yet despite all this, it still remains fantastically bracing to witness a multi-million dollar genre film backed by Warner Bros. (Marvin the Martian makes a cameo in toy form) harbouring such lofty ideals and ambitions. Already exceeding expectations at the US box office thanks to the unquestionable pull of its two Hollywood stars, Gravity offers superior entertainment for mainstream audiences whilst at the same time massaging the old grey matter enough to satisfy Cuarón’s growing legion of cineliterate admirers. Not quite out of this world then, but proof if proof be needed that there’s still life to be found in the intelligent, English-language sci-fi.