Yusup Razykov’s Shame (Styd, 2013) continues the Uzbekistani director’s sociopolitical critique of Russian society with a maritime tragedy that echoes the contentious Kursk submarine catastrophe, which resulted in the deaths of 118 sailors after Russian authorities purportedly refused Western aid. Within the Arctic Circle in a frozen coastal concave of the Kola Peninsula we observe Lena (Maria Semenova) as she attempts to avoid the mundane rituals of the military outpost town. Recently married to an admiral, she finds herself abandoned with the rest of the crew’s wives as they await their menfolk’s return.

However, when rumours begin to circulate that the submarine has been involved in an accident, the community begins to crumble. The women turn to drink, denial and even archaic folk traditions whilst Lena – coolly detached and remarkably unsympathetic – continues her illicit affair with a local salmon farmer. An ambiguous exposition dramatically fades away and Razykov whisks us off to the film’s dilapidated military base, a faded Soviet stronghold where grey concrete apartment blocks assimilate into this backdrop of glacial steppes and frozen beaches. 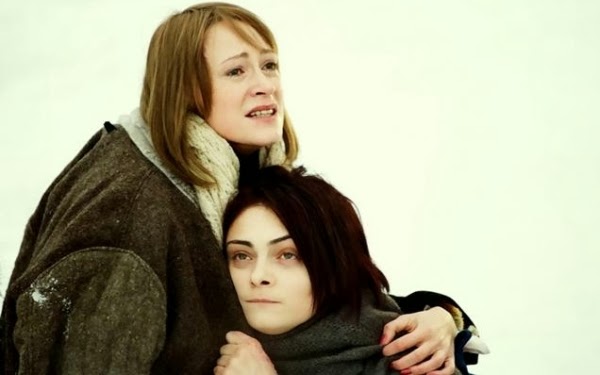 This sleepy Arctic village is a fascinating microcosm of contemporary Russia, fittingly situated in a milieu that spends half the year in darkness. Its inhabiting women are consequently caught between two ages of feminism. “Drowned by her country” is the opening line of Mogwai’s Travel is Dangerous, a song concerning the Kursk tragedy that could be seen to mirror the status of the women in this outpost town. “We need a war, we don’t know how to live another way, what are we without war…we’re all married to war” declares one woman as she ponders her husband’s fate. The term ‘war’ could quite easily be replaced with “men” as Razykov’s Shame works to expose the anomalous assumptions of womankind in patriarchal Russia.

The role of women in contemporary Russian culture is quite a popular topic amongst the nation’s art-house directors with films such as Smirnova’s Kokoko (2012), Ruminov’s I’ll Be Around (2012) and Zvyagintsev’s Elena (2011) all making a case for a shift in power within the domestic gender struggle. Wearing an elegantly tailored blue coat which tells her apart from the other women, Lena simultaneously represents the strong, modern Russian woman, whilst her indifference to the men’s fate makes her a symbol of her country’s inability to accept help – a stronger, more resilient country, yet sadly one than remains too stubborn and proud.

Lena’s detached emotional reaction is eventually channelled in an investigation into her husband’s romantic history, with our protagonist becoming the unlikely saviour to her husband’s former lover. However, after becoming so engrossed in this insular community this excursion is detrimental to the film’s momentum and by switching the focus to Russia’s public health system sadly dilutes Razykov and Shame’s infinitely more universal message about the nation’s evolving national identity.