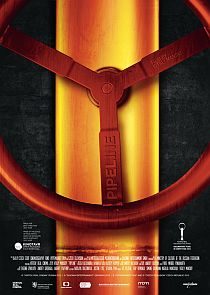 Winner of the Best Documentary prize at Karlovy Vary, Vitaly Mansky’s Pipeline (2013) explores the connections between those living along the route of the Urengoy-Pomary-Uzhgorod pipeline through the abstractions and inferences of their everyday lives. Built in 1983, the pipeline in question runs from Western Siberia to Germany, supplying highly lucrative gas to a wealth of European countries. Beginning his journey at the ceremonial borehole (complete with a golden statue celebrating the power and stability recently unearthed), Mansky allows the pipe’s route to dictate his documentaries message.

These portraits of everyday life vary from fishing communities struggling with the ecological repercussions of the gas in their frozen Siberian village to Nenet reindeer herders worshipping at an orthodox church fashioned from an abandoned railway car. Each brief episode of life along the pipeline provides a laconic insight into how provincial Russia remains a land of resigned hopelessness. Natural energy resources account for approximately half of Russia’s total wealth, yet whilst the gas fields of Siberia feed the country’s economy, the fuel haemorrhaging under the ground fails to heat the people. 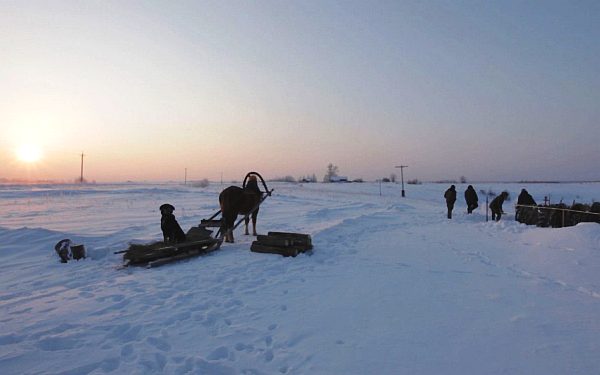 A vein of capitalist exploitation follows the titular pipeline’s route, ravaging the disadvantaged with its ecological impact and intensifying the divide between the ‘haves’ and the ‘have-nots’. The juxtaposition of a wedding scene in Khabarovsk (a town on the Asian/European border) with the gaiety of festivities in Köln, Germany (where the film ends its 104-day journey) beautifully exemplifies the disparity between Eastern and Western Europe – with food clearly more of a precious commodity in the former rather then the wasteful latter. In one village where Soviet street names coexist with newer equivalents, nostalgia for life under the old socialist system remains a natural by-product of this socioeconomic malaise.

Pipeline’s crisp, wide-angle camerawork and leisurely observations are vigilant to the peculiarities or these disadvantaged communities. Title cards indicating our geological location are disregarded in favour of detachment, with the almost alien sounds of a gas factory the only punctuation between this journey’s transition from town to town. Mansky also spends a large amount of time documenting the flora and fauna that dwell in and around these various communities, clearly agreeing with the old mantra that you can tell a lot about people by the way they treat their animals – whilst also simultaneously making for some much-needed light relief.

This compelling documentary about the disparity between poverty and wealth is the antithesis of Soviet filmmaking, with any semblance of socialist realism burrowed underground in Western Siberia before being left to fester as Mansky’s artist dissent towards contemporary attitudes blossoms above the surface. Pipeline is arguably one of the most elegant and shrewdly intelligent ethnological examinations of Eastern Europe seen in recent years, gracefully revealing previously elusive and intangible aspects of social and cultural behaviour, framed within a fascinating anti-capitalist narrative.