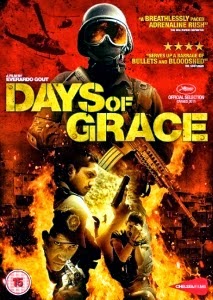 Nominated for the Caméra d’Or prize at the 2011 Cannes Film Festival, Everardo Valerio Gout’s multi-layered Mexican crime drama Days of Grace (Días de gracia) makes its way onto DVD in the UK this week after a prolonged spell in distribution purgatory. Stylishly shot on location in Mexico City over the course of three subsequent FIFA World Cups, the film follows a central triumvirate of morally obtuse individuals, each desperately trying to survive on the mean streets of this hostile concrete jungle. Gout’s feature debut may owe several debts to the hugely successful Brazilian Elite Squad series, but also carries the necessary bite to match its rabid bark. 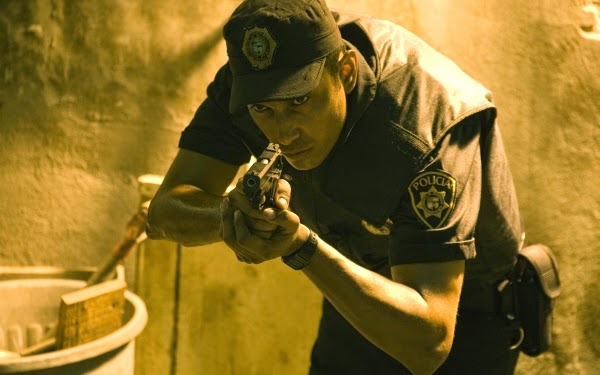 Gout’s Days of Grace commences – as is so often the case with films of this ilk – at its finale, with three armed figures caught in a stand-off as a menacing dog slavers away behind them. From here we jump back to the summer of 2002, where local cop Lupe (Tenoch Huerta) is shaking town two young boys suspected of peddling cocaine. Aggressive and seemingly crooked, we soon see the human side of Lupe as he rushes to meet his newly born son and exhausted wife at a city hospital. Meanwhile, the second narrative strand follows the kidnap and ransom of a businessman, his head captor inspiring a seductive mix of awe and fear in those who follow him. Throughout, Gout jumps from past to present in order to flesh out the complex machinations of his easily corruptible cast of players.

Though undeniably reminiscent of the aforementioned Elite Squad films and several of fellow Mexican Alejandro González Iñárritu’s finest exports, Gout’s Days of Grace does have a certain level of brains behind its brash brawn. The Mexican capital is presented as a nightmarish dystopia where an individual’s hopes and dreams are crushed almost on conception – and ‘doing the right thing’ a fanciful notion at best. Huerta’s Lupe is our pistol-toting guide into this murky underworld, brought into an elite narc squad by his congratulatory Comandante (José Sefami) following a frenetic daytime shoot-out. However, Lupe’s actions prove to have severe consequences for both himself and his young family.

As with the work of Iñárritu, the less you know about the interweaving plot-lines that flesh out Days of Grace, the better. It’s certainly the film’s strongest suit, as Gout’s own visual indulgences (several film stocks are used for no greater purpose than to distinguish time frames) can quickly grate on those audiences already familiar with the striking stylistics employed by key comparables Amores Perros (2000) and Fernando Meirelles’ masterful City of God (2002). Nevertheless, Gout should be praised for presenting contemporary Mexico with precious little of the tourist baiting, tequila-soaked charm it’s so often lumbered with.

Win a DVD copy of Everardo Valerio Gout’s Days of Grace with our latest competition. Follow this link to enter.