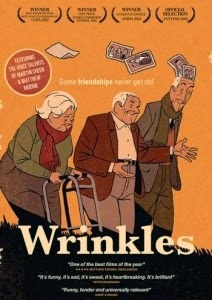 ★★★☆☆
Personal battles against mental illness have long been the mainstay of cinematic drama, with countless deserving Oscar winners (and an even greater number of less-deserving awards fodder) exploring the effects of autism, schizophrenia and Alzheimer’s upon the most beautiful of minds. The latter is dealt with in novel form in Spanish animator and director Ignacio Ferreras’ Wrinkles (2011). A touching and often funny portrayal of one man’s upheaval after his son and his son’s wife move him into a retirement home, and based on the Paco Roca graphic novel, Wrinkles’ irreverence is commendable, even if its integrity does now feel somewhat compromised by a dull, lifeless English-language dub. 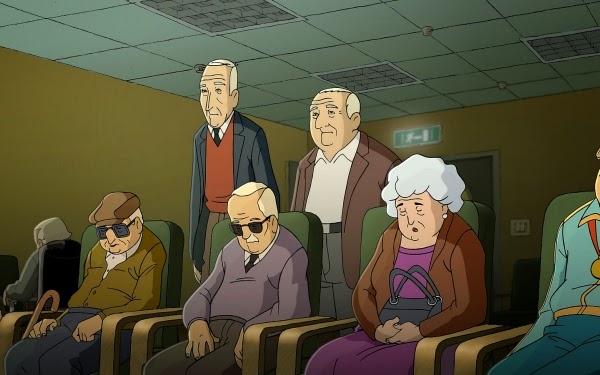 Ferreras uses the animated form to good effect, beginning his film by visualising Emilio’s (voiced by Martin Sheen) temporal confusion. After rejecting his son, Juan (Matthew Modine), for a bank loan, our long-retired protagonist is snapped back into the real world, unable to comprehend the mistake he’s just made. Distressed and frustrated by his father’s worsening condition, Juan secures a place for him at an apparently highly-regarded care home. It’s here that Emilio meets lovable scoundrel Miguel (George Coe), a charismatic chancer who spends his days easing money from his fellow inmates in return for useless advice (in one scene we see him directing an elderly lady to the payphone, only for her to forget his instructions mere seconds later). However, it’s not long before Emilio’s deterioration worsens.

Having plied his trade with Frenchman Sylvain Chomet on his wonderful last effort, The Illusionist (2010), Ferraras is well-versed in the art of utilising traditional cel animation to illuminate adult themes – even if Wrinkles does lack some of the visual verve of Chomet’s spell-binder. His sophomore feature is undoubtedly at its best when inside Emilio’s discombobulated mind, distrusting of those around him not out of spite but out of mental vulnerability. As such, Miguel proves the perfect dramatic foil: seemingly sharp as a brush whilst in actuality hiding his own fragilities behind a veneer of know-it-all bravado. Though it sometimes finds itself falling back on well-worn tropes of the One Flew Over the Cuckoo’s Nest mould – a sinister forbidden floor, allusions towards maltreatment and abuse – Ferraras’ Wrinkles has enough heart and soul to bypass the morose mawkishness of many of its modern comparables.