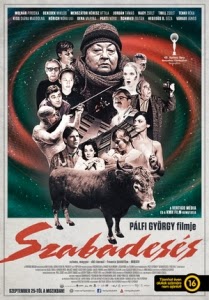 György Pálfi’s wilfully sardonic Free Fall (2014) is an inflammatory anthology of satirical vignettes all set within the same Budapest housing block. A jovial take on contemporary Hungarian society, Pálfi’s latest places the former Soviet satellite state within a hall or mirrors, with each dovetailed yarn a revealing portrait of contemporary Hungary warped and distorted to absurd proportions. An elderly woman wraps up warm in her coat and scarf and proceeds to leave her apartment. Instead of heading down into the cold bracing wind of the night she struggles up the staircase and onto the apartment block’s rooftop. She steps up onto the threshold and plunges off the edge. 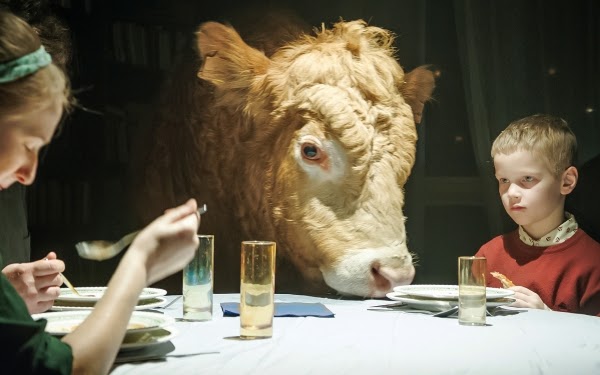 However, despite the eight-story fall she miraculously survives and after taking a moment to compose herself, limps back towards the apartment block. As she struggles to ascend the concrete staircase Palfi allows us to gaze into the lives of her neighbours, scrutinising their lives and in doing so observe an eclectic group of idiosyncratic eccentrics and their bizarre domestic habits. Each of these visits results in a darkly comic short film that offers the viewer a surreal glimpse into Palfi’s weird and wonderful mind. There’s the flat where a wife’s plan to introduce a third party to her marriage culminates in a slapstick sitcom, or the apartment where a compulsive clean-freak takes the concept of safe sex to new extremes, using not just condoms but surgical gloves and cellophane to ensure the exchange of fluids is impossible.

The series of grotesque and, in many cases, culturally specific send ups looks to examine the generational disconnect in today’s consumerist society. However, despite the film’s intention to construct an imaginative exploration of contemporary culture’s shift towards individualism, Free Fall’s is ultimately an inconsistent compendium of impulsive skits and sketches. Amon Tobin’s erratic yet atmospheric score further enhances Palfi’s unique vision. Coalescing with the film’s peculiar tone, this unison of invasive electronica and Palfi’s distinct visuals creates a hermetically sealed dungeon of the grotesque and weird complexities of humanity. The one theme that runs throughout the film is changing attitudes towards love and relationships. How much of this is a conscious attempt to study the disintegration of social values in contemporary Hungarian communities, or if it’s merely a natural by-product of Free Fall’s residential setting is unclear, yet it thankfully adds some coherency to an erratic, disjointed, yet enjoyable screwball caper.