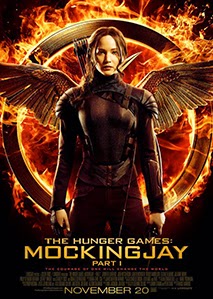 The Hunger Games has become a cultural phenomenon over the past seven years with Suzanne Collins’ alternative visions of gender and class inspiring audiences both young and old. Some fans can even be seen adorned in ‘Down with the Capitol’ t-shirts. However, with the franchise’s penultimate instalment, Hunger Games: Mockingjay: Part 1 (2014), Collins’ revolutionary-lite rhetoric has become unravelled by the commercially driven decision to split the final novel into two films – ultimately lessening the satirical bite and reverting to the gender archetypes it originally sought to challenge. Francis Lawrence’s second foray into Panem initially attempts to dissect the manipulative influence of the media. 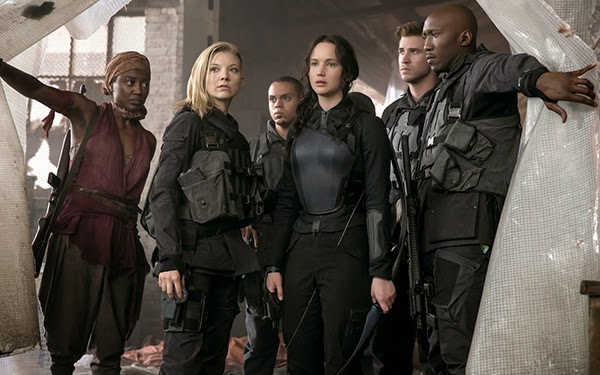 The artificial killing fields of the original combat and the Quarter Quell are replaced by the underground military headquarters of District 13. When Katniss Everdeen (Jennifer Lawrence) is debriefed by 13’s Plutarch Heavensbee (Philip Seymour Hoffman) and President Alma Coin (Julianne Moore) about her new role as a beacon of hope to the oppressed populous of the outer districts the film’s antagonist, President Snow (Donald Sutherland) quibbles over semantics whilst developing a speech to quash the rising rebellion. Theories on collective insurgency and narrative exposition are dispensed to the audience like entrées at a dinner party, yet this dissection of media strategy is a commendably low-impact opening for one of this year’s most anticipated blockbusters.

Previously Katniss’ appearance as an object of desire and an emblem of resistance has been an important narrative tool, with how she looks and how she’s desired often viewed as more important than who she is. Katniss has fought against the contemporary depiction of the female heroine in young adult fiction, playing the system for survival and accentuating her femininity to manipulate the audience. However, in Mockingjay, the focus is concentrated on her authenticity as an icon for change. At one point her former stylist and PA Effie Trinket (Elizabeth Banks) even describes her rebel attire by exclaiming, “People will either want to kill you, be you, or kiss you.” The naivety of Katniss in the previous films has all but dispersed and she’s forced to face the contradictory discourse surrounding contemporary girlhood in Western culture. However as the scope widens Katniss’ complexity is undermined by the film’s reliance on her feelings for Peeta (Josh Hutcherson) and Gale (Liam Hemsworth) to dictate the narrative’s momentum. Lawrence imbues the film’s source material with the same visceral pleasure and elaborate spectacle – most noticeably in a suitable tense jailbreak sequence – and darkens the mood considerably with a haunting score that replaces the terror evoked within the killing arena with a lurking sense of dread.

However, the film’s pacing is noticeably languid and more cynical viewers will feel like padding is being added to justify its extended theatrical run. Fans of the franchise will inevitably appreciate the opportunity to spend more time with these characters, yet those more enamoured with themes than its young adult melodrama will swiftly become irritated by maudlin self-pitying and patronising symbolism – perhaps worse observed in a scene where Gale and Katniss go hunting and find themselves in awe at the sight of a majestic stag that doesn’t run for cover. “He’s not afraid of us?” pronounces an awestruck Katniss, “That’s because he’s never been hunted,” Gale replies, before a long silence to allow the audience to absorb the metaphor. Whilst the franchise initially pertained to criticise systemic power, media influence and the heteronormal nature of young adult fiction, Mockingjay ultimately promotes the idea that our current ‘freedom’ is something to be desired and fought for rather than questioned. This is all whilst simultaneously promoting a world where our cultural output is dictated by its financial potential – an ironic twist in a franchise that relies so heavily on its counter-cultural identity.