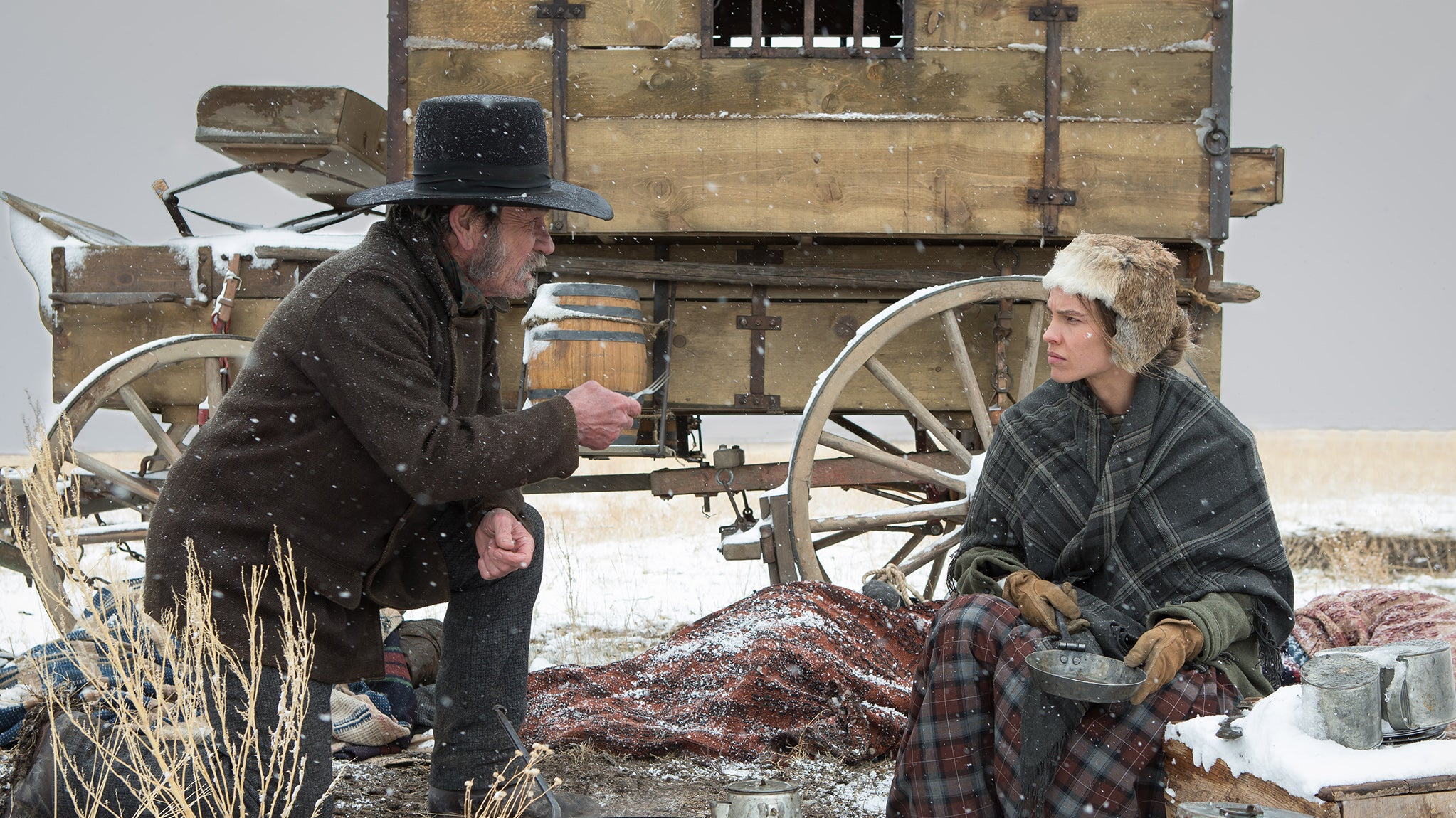 Tommy Lee Jones’ second directorial effort following the underrated The Three Burials of Melquiades Estrada (which played at Cannes in 2005), The Homesman (2014) is something of a reverse western, with homesteader Mary Bee Cuddy (a sterling turn from Hilary Swank) and amoral old-timer George Briggs (Jones) heading from west to east with a cargo of three mentally-ill women, played by Grace Gummer, Miranda Otto and Sonja Richter.

The characters have been variously defeated by the brutal reality of frontier life, with loneliness, diphtheria, child mortality and marital abuse having driven these women to the point of desperation and beyond into the realms of madness. In contrast to her charges, Cuddy is a survivor. She ploughs her fields, tends to her livestock and tries to woo the eligible bachelors thereabouts with her home cooking and fine business sense (to no avail). “You’re bossy and plain,” she’s told by one cowboy who’s eaten her pie but won’t share her marital bed.

Even those who admire Cuddy complement her in not entirely welcome terms: “You’re as good a man as any man hereabouts.” Her decision to take on the task of caring for the women is greeted with relief by the menfolk, thereby rid of their troublesome women, even including her in that number. Fortunately – and here the plot contrivances shows a little too openly – she meets up with Briggs just as he’s sitting on his horse with a noose around his neck, left to die by a bunch of vigilantes. She agrees to rescue him on condition he help her in her task, careful to wring the promise from him before telling him the specifics.

However, as anyone who’s seen Jones’ debut film will know, this is a director who isn’t interested in easy genre pieces. The Homesman seems to be trekking a familiar path but, like the characters, it’s going in the opposite direction. The twists the plot takes are largely unexpected for a film so visually generic: the opening panoramic frames of Nebraska are handsomely conventional. The characters they meet along the way are a motley bunch (Tim Blake Nelson plays a suitably nasty cattle driver), and the stench of death is everywhere.

Indian burials and children’s graves are the only landmarks that break the barren wind and snow swept landscape. In another (surreal) reversal, a hotel on a hill looks out onto a bare plain wherein a town is supposed to be: the land lots are staked out and streets are signposted, but only the hotel stands, a kind of pre-settlement ghost town. James Spader presides over the premises, sporting a deep as his boots Irish brogue and two fine pistols is the nascent landowning class in person; long on flannel, short on compassion.

As with Three Burials, Jones once again casts himself as the reluctant hero, tasked with a quixotic mission. Aside from his craggy orneriness and dry wit, Jones has within him a genuine fury. His heroism, such as it is, is fuelled by obstinacy and rage as much as anything else. But more than anything this is a film about women on the frontier. Their situation is grim indeed, and males are for the most part brutal and uncaring.

Swank stands as an ideal counterpoint; someone who can meet the men on their own terms. And yet, with her cloth piano and her yearning desperate need for a family – leading her to seek the hand in marriage of men who are clearly beneath her worth – she’s not as far away from the stress and trauma-induced madness which has struck down her protectorate. With The Homesman, Jones has produced an original and cantankerously offbeat western which becomes increasingly beguiling as the road stretches on.