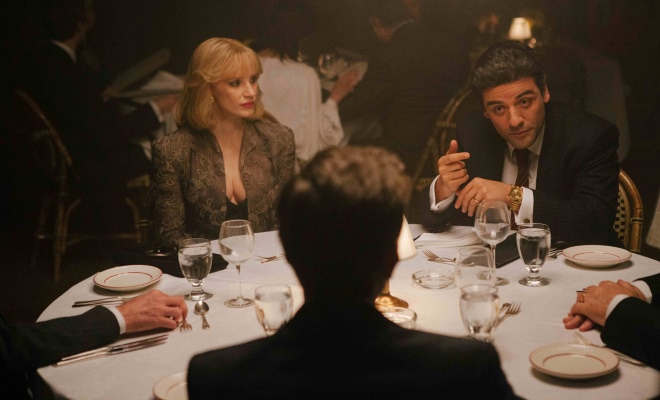 With just three films J.C. Chandor has managed to prove himself a director capable of morphing to suit his subject matter. Margin Call (2011) was dialogue-heavy and cerebral, reflected in the computer screens and shimmering steel and glass of the surroundings. In the far more elemental All Is Lost (2013) the sea was the ever-shifting landscape for Robert Redford’s near-wordless toil. Most recently, the director has turned his hand to a crime drama of sorts, adopting a grimy, muted aesthetic in keeping with the tumultuous setting of New York in 1981. The scintillating A Most Violent Year (2014) highlights what has been the through-line of Chandor’s terrific career to date; the struggle to survive.

Financial ruin and death were the respective threats faced in his first two features and they combine in the onslaught faced by Abel Morales (Oscar Isaac). An immigrant who has transformed into a successful self-made oil merchant, Isaac balances deftly on a precipice as a man determined to maintain his integrity in the face of mounting pressure to act against his principles. He refuses to allow himself to be drawn into the violence engulfing the city despite his wife, Anna (a fine turn from Jessica Chastain), bristling at his reluctance to defend his family like a man. This is the gangster genre not as crook going straight, but businessman battling to stave off corruption of the empire he has built. Isaac manages to remain admirable, and even likeable, while demonstrating the callous will that has been key.

The foreboding atmosphere is palpable from the first minute. Background radios offer a persistent crackle; news of another shooting or murder on these most dangerous of streets. The trucks from Abel’s company are repeatedly being hijacked and the fuel syphoned. However, he will not arm his drivers for fear of an incident that will derail an impending deal, or bring the District Attorney (David Oyelowo) down upon his head. Of course, all men have a breaking point and Chandor’s screenplay pushes and needles to find Abel’s. The interest lies not only in how far he can bend before snapping, but how many people he is willing to sacrifice in the pursuit of honouring his own combination of ego and ethics.

Refinement is the image he wants to cultivate, but Isaac’s performance brims with charm and menace. It is easy to understand how such a man won the heart of Chastain’s straight-talking gangster’s daughter, and equally the steel that she most values in him is evident in his penetrating gaze. She also embodies Chandor’s recurring motif of self-preservation, doing a little syphoning of her own. The moral ambiguity that pervades the entire cast of characters – extending to bank manager and D.A. alike – is accentuated by shadowy interiors and the cold desolation of disused filling stations on the water’s edge. Although A Most Violent Year may hit fever pitch when Abel engages in a nerve-wracking chase of a stolen tanker, it’s in the murky uncertainties and frosty climate that it endures and excels.