Guy Maddin has fashioned a distinctive identity by harnessing cinematic nostalgia and forging it into something entirely original. His films are like discovering a neglected canister of film containing a story from a forgotten time that’s been lovingly repaired and projected for posterity. His anarchic disregard for form means his films often resemble a chaotic hallucination of the silent age, Gothic literature and misremembered B-movies. They’re Frankenstein’s monsters of style and form, lovingly interlaced with the crackles and hum of putrefying celluloid. The Forbidden Room (2015) is Maddin’s aesthetic nearing critical mass, a whimsical, genre-spanning opus that demonstrates the totality of his enigmatic style. 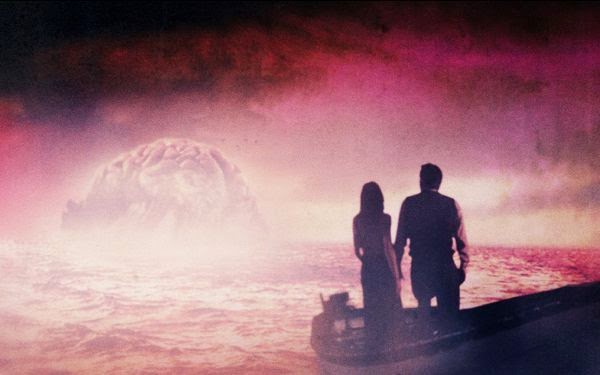 Escaping through doors accessible only in their dreams, Maddin’s characters flow seamlessly from one narrative to another in this intertextual post-modern horror show. The Forbidden Room opens with an infomercial about appropriate bathing techniques before plunging us in to the briny deep to join the crew of a doomed submarine. From here we’re thrust into a chaotic nebula of crumbling nitrate imagery, each tale pushing up against the another, vying desperately for our attention. One chapter features a flustered Mathieu Amalric awakening from a nightmare to the news that his girlfriend is on her way. It’s her birthday and he’s forgotten to get her a gift. Not wanting to displease her he collects his most cherished possessions, passing them off as replicas, and displaying them lovingly as gifts.

Just like Amalric, Maddin has gathered his own collection of cherished items and, with all the mischievous energy of a child parading their favourite toys, he projects them lovingly on the screen for our enjoyment. Whilst the above gives some idea of The Forbidden Room’s loose narrative structure, it barely touches the surface of a wide-ranging story, whose vast cast of characters include a vampire, some lumberjacks and a gang of werewolves. To an extent, it doesn’t really matter whether Maddin’s narrative is coherent of not, it’s the method of storytelling rather than the story which becomes so enthralling. The invigorating sense of invention that lies behind the film’s lurid colour scheme, jovial title cards and extravagant visual mimicry propels this matryoshka doll narrative into a non-stop rabbit hole of euphoria, with characters and stories governed by little more than Maddin’s unflagging enthusiasm for film.

Whilst lacking the emotional backbone of My Winnipeg (2007) or the (relatively) cohesive narrative structure of The Saddest Music in the World (2003), Maddin’s visuals continue to resonate individually and, eventually, as one whole long after the credits roll. There will be some who find the unbridled delirium of Maddin’s nitrate fever dream unbearable, yet it’s worth noting that whilst his latest effort is unwavering in its commitment to avant-garde storytelling, there’s also plenty of remarkably funny moments tinged with genuine sincerity. Some with argue that Maddin suffocates his work with his obsessions, creating a seal of reverence that only he holds the key to, yet for fans of his work this is a resplendent culmination of his oeuvre. You’ll enter The Forbidden Room anticipating something strange, but nothing can prepare you for this singular voyage into the mind of a director who dreams pure cinema.