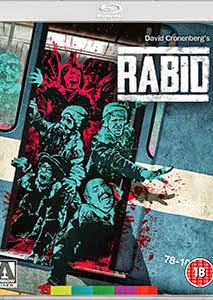 David Cronenberg’s second theatrically released picture, Rabid (1977), can be taken very much as a companion piece to his debut, Shivers (1975). While not linked narratively, both are set in Montreal and proffer parasitic creatures and transmitted diseases as the engine of doom. As with his first film, satirical touches further mark his sophomore feature out as a clever mutation of – and commentary on – the old ‘science out of control’ formula. There is also ghoulish humour present in both. Medical practitioners with the best intentions – to help humankind and various ailments – unwittingly create monsters, when nature and technology does not do exactly as intended. 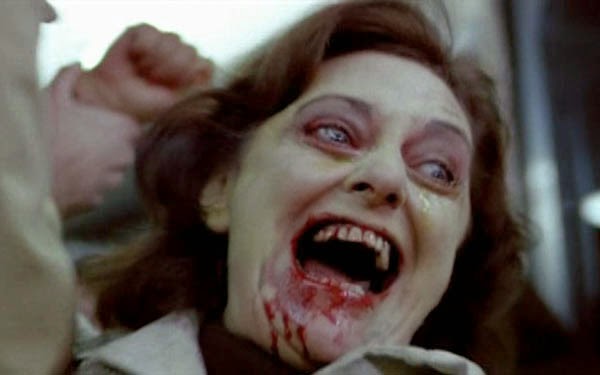 In Shivers, Dr. Hobbes is working with parasites to aid in a radical organ transplant procedure. In mixing aphrodisiacal and venereal properties, the result is a sexually-charged pathogen – that looks like a giant leech – ingested via the mouth or other entry points. It turns folks into sex-crazed maniacs. In Rabid, a woman is transformed into a vampire-like figure after more quintessentially Cronenbergian experimental surgery (new tissue grafts that, instead of helping form replacement intestines, develop into a phallic-shaped stinger that sucks blood from the victim.) Instead of making more vampires, however, the disease spreads as a zombie-like contagion. If Shivers was intended as a grotesque comedy, Rabid is pitched more as a Gothic tragedy.

Landing porn actress Marilyn Chambers is exactly the kind of stunt casting that could have gone very wrong. The Behind the Green Door (1972) star is actually very good as the motorcycle accident patient selected to undergo treatment at Doctor Keloid’s clinic (the name is a pun on a type of scar tissue formation). With her proto Farah Fawcett hairdo and girl next door looks, Chambers makes the most of the role and it’s a glimpse perhaps of what could have been if she hadn’t returned to the world of skin flicks. Shivers makeup maestro, Joe Blasco, worked once again on creature design and effects. The phallic appendage is the stuff of febrile nightmares and its position on Rose’s body, protruding from her armpit area, treads a line between silly and surreal. In fact, it isn’t a world away (in concept) from the xenmorph inner-mouth seen in the Alien franchise.

Rabid, benefitting from an increased budget, is also far more ambitious and polished than its predecessor. Cronenberg makes extensive use of outdoor, wintry locations and exterior-set scenes. Perhaps not since Mario Bava arrived on the scene in 1960 was there a horror film director whose style came to the screen so fully formed and recognisable. Cronenberg’s brand of apocalyptic nightmare showed off a remarkable vision and thematic clarity. It’s with these two powerful and icky movies that the Canadian would go on to earn the nicknames ‘the Baron of Blood’ and ‘Dave Deprave.’ Paired together – as they share a similar genetic makeup and both are now available in high definition Blu-ray format – Shivers and Rabid are among the finest and most revolutionary horror movies ever made.