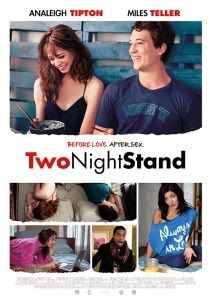 Romantic comedy convention is condensed into forty-eight hours and a single apartment in Max Nichol’s debut, Two Night Stand (2014). Analeigh Tipton and Whiplash (2014) star Miles Teller play the twenty-something couple whose online hook-up is unexpectedly extended by a monumental snowstorm. New York in buried and the two must face last night’s indiscretions and re-introduce themselves. Where the post-coital premise and proceeding hijinks are no doubt intended to feel fresh and edgy, the punchlines are mostly obvious and the acerbic sparring, such a delight in the genre’s better entries, leaves you cold. There are a couple of late scenes that hint at a thaw, but the frost remains palpable even then. 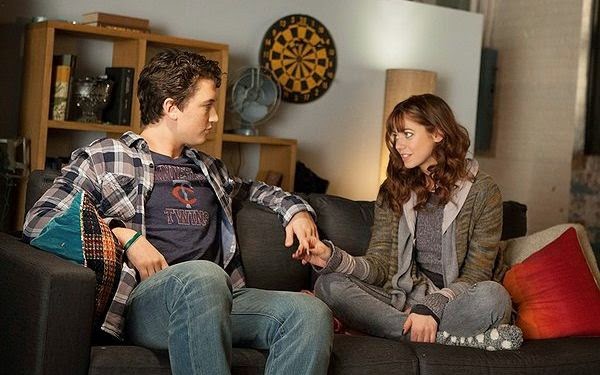 Tipton plays Megan, a young, recently-single and unemployed college graduate lacking direction in life and looking for some no-strings-attached sex to boost her dwindling self-esteem. Online she plumbs for the first guy with a modicum of charm and wakes up the next morning stranded in the apartment of Alec (the likable Teller). What unfolds is doubtless supposed to be a pulling back of the sheets to reveal the naked bodies of lingering taboos around internet booty calls and discussion of sex with a partner. Rather than zinging with intelligence, it instead becomes mired in smug passive-aggression that manages to be nothing like as frank as it thinks it is. Neither player wins the audience’s allegiance during the oft-strained game of seduction – much less convinces as a human being.

Any notion of Megan’s depth – be that in insecurity, empowerment, or both – is lost beneath shrill characterisation and Tipton’s flailing limbs. They’re presumably expected to provide visual contrast to Teller’s stillness, but are overwhelming rather than complementary. For his part, Teller imbues Alec with similarly awkward emotional hostility to that of his standout turn in the recent Whiplash, but there’s none of that film’s empathy or poignancy to undercut it. That said, he gets much of the screenplay’s funniest lines in sarcasm, even if those that hit home are few and far between. What is far more prevalent is smart-ass philosophising that might be included to betray its characters’ naivety but actually suggests that of the screenwriter. There are some moments that work well – the initial exchanging of bitter and defensive barbs before they comprehend their incarceration, for instance – but as time wears on the narrative becomes ever more trite. This is particularly problematic in a heavily manufactured third act conflict that stretches credulity and patience. It’s a shame because Tipton and Teller both seem capable of more, but Two Night Stand is less of a good time than the kind of night that makes you wish you’d just stayed in.