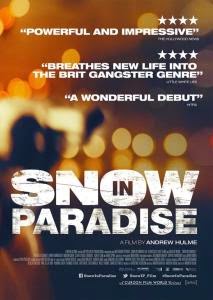 The first film from editor Andrew Hulme has a promising visual edge but is saddled by a style-over-substance formula that harks away from character development and narrative discussion. Co-written by Martin Askew, on whose own story the film partly bases itself, Snow in Paradise (2014) is the tale of Dave, a low-life East London gangster who escapes into Islam for refuge from when he goes in too deep. We meet Dave (Frederick Schmidt) on a drug delivery in East London, alongside his best mate Tariq (Aymen Hamdouchi ). They don’t look like typical gangsters – both slim, with Dave in a hipster shirt – especially swapping goods with burly men from a rival gang. 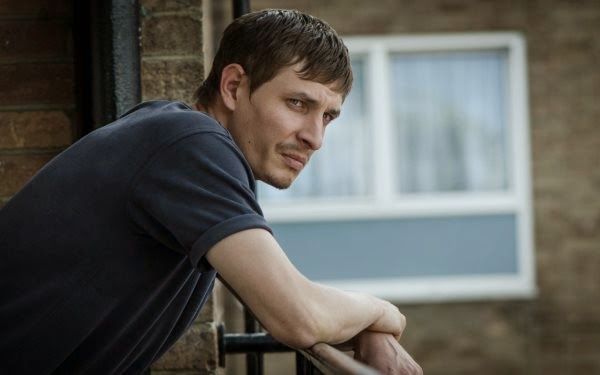 When Dave slips away 1kg of coke for personal use, Tariq goes missing, and Dave spirals into drink as he considers the effect of his actions. While searching for his mate, Dave stumbles into Shacklewell Lane Mosque, and the film deviates from the norm. He’s treated well by the local imam, who promises peace in Islam. He leaves assuming he won’t be returning, but with a gang war brewing between kingpin Uncle Jimmy (sharply played by writer Askew, himself) and a former associate of Dave’s father Micky (David Spinx) he’ll need an escape route. Not from others, but from himself. This yields the surprise behind the film’s enigmatic, but fitting, title. Hulme has a keen eye for London’s visual identity and Hoxton’s gentrification is marked in a comic vein.

It’s interesting perhaps that the white, anti-social Dave has more problem with rich hipsters than with other races – is London now a post-race city, but not post-class? Schmidt’s Dave is a fiery individual who has the tenor of Jack O’Connell about him, and it’s no surprise the director said he discovered the young actor on a street corner after an argument with his girlfriend. Schmidt has a clarity in his performance in his ability to show Dave’s struggle with the comprehension of his own actions. But Hulme is less able to fully gauge the emotional development of his main character, whose changes come with a little too suddenness.

His entry into Islam – a fascinating story (and it really happened) – is cut too short, with Hulme concentrating more on the main characters’ gang violence. Of course, in a time of daily news reports, it’s important to note the film’s positive take on the openness of Islam, although one must wonder whether Dave’s entry into the faith gives the impression of a religion trying preying on the weak. Still Hulme, whose editing work includes on The Imposter (2012) and Control (2007) has an eye for a fine shot, with a droning soundtrack keeps a dazed sense of the actions on screen.