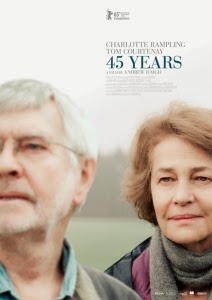 ★★★★☆
Based on a short story by David Constantine, British director Andrew Haigh’s poignant drama 45 Years (2015) is led by two terrific central performances from Tom Courtenay and Charlotte Rampling. Kate and Geoff are preparing for their forty-fifth wedding anniversary. They have no children and live in a small rural village near the Norfolk Broads. They seem content with their lot and are happy together; they still talk about serious matters, laugh and attempt to have sex. Then Geoff receives a letter informing him that the body of his first girlfriend, Katya, missing for fifty years after a hiking accident, has been found frozen in the Swiss Alps. 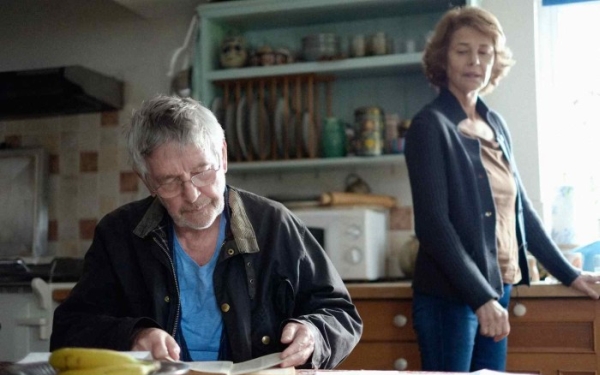 Understandably, Geoff is thrown by the news and reminisces about the past and his first love. He finds old photographs of Katya and contemplates returning to Switzerland to identify her body. Kate, trying to remain calm, is sympathetic, continues to walk their dog and prepare for their anniversary party. Despite having had a heart bypass five years earlier, Geoff takes up smoking again and becomes increasingly obsessed and irascible. Kate finds her patience tested to the limits. After digging into his past herself, she learns that Geoff has not told her everything about his relationship with katya, and Kate delivers an ultimatum. Although 45 Years focuses on a robust relationship tested in old age, Haigh descries it as the natural companion piece to his acclaimed debut feature about first love, Weekend (2011).

The emotional power relies, to a large extent, on the credibility of the performances and Courtenay and Rampling do not disappoint. In numerous close-ups, Rampling conveys the conflicting emotions of a woman by turns hurt, uncomprehending and angry. Courtenay is just as superb playing a man who is used to feeling but is unable to express his emotions. Instead he relies on various arm gestures and other physical ticks to articulate his thoughts. 45 Years may not have the epic sweep of some of the other films screening at EIFF in 2015 but it’s no less moving. It can take years to form a bond and just minutes for it all to unravel. Haigh’s latest is an impressive study of a couple haunted by their past. and a potent reminder both of the fragility of love and the need to keep communication open at all times.