Two Edinburgh regulars, Mark Cousins and Mania Akbari, have collaborated to produce an insightful film-essay exchange, their differing filmmaking styles bursting with ideas and inspiring new thought in each other in Life May Be (2014). The project was conceived when the distributor, Second Run asked Cousins to write something in response to Akbari’s One. Two. One (2011) for their release last year. Rather than the usual essay, Cousins instead wrote a letter that begins, “Dear Mania Akbari, I’m sitting in a pub in Edinburgh, Scotland. It’s a cold May day…” and goes on to imagine a journey taken by the two filmmakers from Sweden to London, via Rome, Tehran, and Hungary. 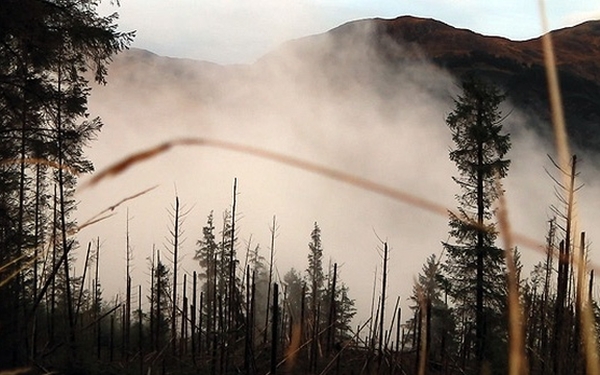 Life May Be begins in the Highlands with a shot looking over a loch as the mist rises to partially obscure the overlooking hills, and then falls to reveal them again as though the atmosphere were orchestrating its own teasing display. He holds the shot while he explains the origin of the aforementioned letter, and how it inspired a response from Akbari, resulting in the series of video essays that form the film. By way of reply, Akbari also shares the story of her travels – how she left Tehran and now lives in exile in London, how before making her new home there, she visited friends in Dubai – and Sweden where tours of galleries revealed that “only art can bind us to the vital roots of existence.”

Akbari reveals her vast knowledge and precise narrative technique by making the combination of poetry, personal recollection, documentation and journalistic curiosity seem both effortless and deeply moving. In response, Cousins also muses on the body, declaring his passion for being naked and the “joy, optimism and fun” of abandoning his previous insecurities for the empowering vulnerability of nudity. He talks of Stephen Gough, who was imprisoned for six years for hiking in the nude. Cousins films himself writing the letter, positioned sidelong, reclining on a sofa, and performs something of a striptease at the same time by cutting to reveal when an item of clothing has been removed. This exposes not just Cousins’ thoughts and attitude towards nakedness, but the difference between a society in which nudity is punishable by detainment, and one in which the body is denied outright; or, as Akbari eloquently puts it; “In your country, the body is just the beginning, in my country the body must not be seen, but imagined.”

Both filmmakers therefore combine the personal and the political, demonstrating that each perspective is essential to the other in the work of an artist, and it’s the ways in which Akbari is inspired by Cousins’ enthusiasm and ideas that is so exciting in Life May Be. Having read Cousins’ pronouncement that she is to Iran what Virginia Woolf was to England, Akbari’s first pilgrimage to Woolf’s home proves to be the spark that ignites a much deeper personal reflection on her own body and representations generally, of the flesh – can Akbari, who was told her body was a “nuisance” all her life – discover the joy of unveiling that Cousins’ has, and what will this tell us about exposure generally, both physical, and as Life May Be attests, between two creative souls? The answer comes when finally, Akbari’s poetic revelation renders Cousins’ awed and mute, with the resulting use of text, image and music – Brahms’ A German Requiem – allowing this thoughtful, intelligent cinematic conversation to really soar.