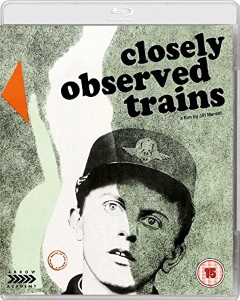 La petite mort is inextricably entwined with the grand one in Jiří Menzel’s wonderful Closely Observed Trains (1966). A bittersweet and funny coming-of-age tale, it doubles as an allegorical quest for a nation’s cojones amidst the milieu of Nazi-occupied Czechoslovakia. Freudian readings of narrative and mise en scène are lustily encouraged as the challenge of losing one’s virginity becomes akin to an act of rebellious non-conformity, or even actual revolt. 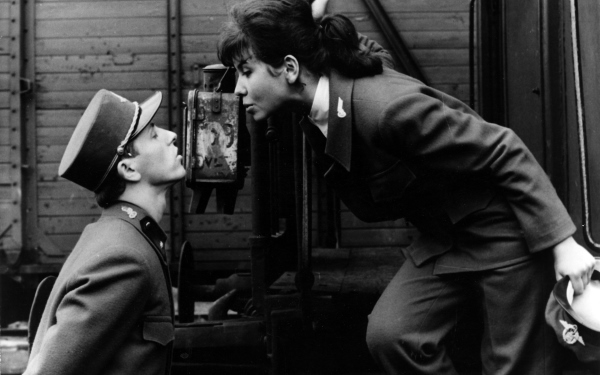 One of the most famous exports of the incredible Czech New Wave – it won the foreign language Oscar – the film receives a new Blu-ray release, of a recent 4K restoration, this week courtesy of Arrow. The virgin at the centre of the narrative – which is adapted from Bohumil Hrabal’s novel of the same name, with the writer’s help – is Miloš Hrma, played by Czech pop star Václav Neckář. He’s a naïf making the great voyage into the adult world in more ways than one. At the same time as beginning his first job at the local train station, he feels stirring in his loins for various nubile members of the opposite sex.

Notionally a sex-romp à la Porky’s, Closely Observed Trains plays titillation and broad laughs off against more delicate and melancholic dramatic touches; Miloš’ problematic ascent to sexual awakening and manhood is that of the Czechoslovak people. Plagued by inadequacy in the trouser region, Miloš has eyes for the pretty conductor, Máša (Jitka Bendová) but is unable to rise to the occasion. From protruding hat-stands to the levers he must handle for work, Menzel masterfully ridicules Miloš’ erectile dysfunction through the meticulous insertion of phallic symbols into the frame. The young man’s problems seem to stem from the hat that is ceremonially placed on his head in the opening sequence by his mother; it embodies his submission to the norms of both his apathetic family and the bureaucracies of the collaborating officialdom. In an introduction reminiscent of Wes Anderson – in fact, it would be a surprise to hear that Anderson didn’t consider Menzel as a major influence – the history of the ‘famous’ Hrma male line is quirkily recounted, their work-shy natures and refusal to muck in the source of their renown.

Mordantly funny is the tale of a grandfather who was a hypnotist and tried to use his powers to halt the march of German army. The lead tank seems for a split-second to stop at his command before continuing its inexorable journey and flattening him in the process. In Miloš the family may finally have a man capable of truly being one, but not by his own design – he’s cripplingly unable to take action to achieve his aim, and cross the threshold. Fittingly for a film about sex, there’s much innuendo and ribaldry to be had from the various scenarios presented and Menzel litters them all with deeper meaning: the tearing of the station-master’s antique Austrian sofa during congress; lechery over the physical pedigree of a local baroness; a group of bone-tired soldiers stopping for a relaxing sojourn in a train full of nurses; the famously risqué scene in which the lothario Hubička (Josef Somr) stamps the backside of the amorous young telegraphist. Through all of these bawdy episodes Menzel adds layers of texture that you’re unlikely to see in many sex comedies.