Film Review: The Land of the Enlightened 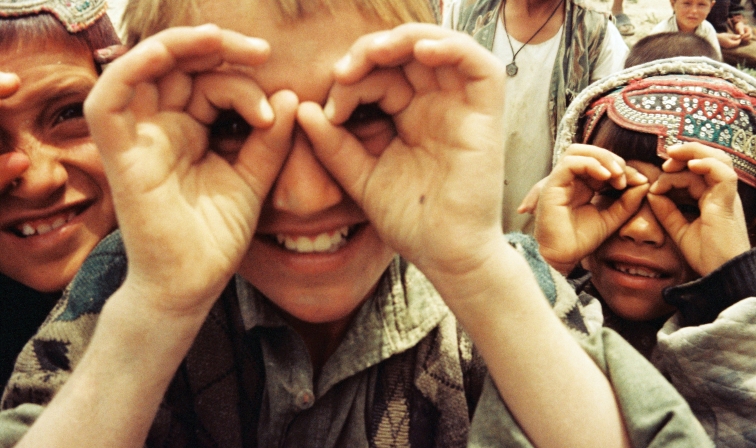 In this his debut film, Belgian photographer Pieter-Jan De Pue blends fiction and documentary to locate a deeper truth in Afghanistan’s tortured history of invasion and occupation. A cinematic voyage across the arid Afghan hinterlands, The Land of the Enlightened tells the story of a group of young boys whose lives have been forever compromised by a legacy of war. A film saturated in history without ever resembling anything that has come before it, The Land of the Enlightened opens with a voiceover recalling an Afghan fable about how God distributed land to the world’s nations.

Nasrullah, the Afghan king, was last in line because he was too courteous to push his way to the front. God apparently so touched by his sadness that he granted the King a piece of land he was saving for his own garden. Genghis Khan was the first to try and plunder the country’s riches, and countless other armies would follow, each leaving their mark on this once unspoiled terrain. Shot entirely on 16mm, The Land of the Enlightened is De Pue’s attempt to rediscover the nation’s lost beauty. As word comes over the wireless that President Obama has announced the U.S. withdrawal from Afghanistan a gang of Afghan kids from the Kuchi region rejoice and start planning how they’re going to take their country back. They live in a former Soviet military outpost, surviving of the money they make from selling scavenged mines and artillery.

Pue allows the children to recreate their lives in a peculiarly dreamlike image of reality. Whether they’re slaughtering goats, taking opium or ambushing caravans, the camera never flinches. One American soldier sums it up best whilst explaining why he’d conscript an army of children like these if he ruled the country, “They scare me, it’s their innocence, they’re scary like clowns”. De Pue shot the film over seven-years, harnessing the extensive knowledge he gained of the region whilst travelling throughout the country with organisations like the Red Cross. The result is a somewhat disorientating blend of fact and fiction which would be considered documentary if it wasn’t for De Pue’s refusal to conform to any pre-existing models of documentary filmmaking. Land of the Enlightened is an irrefutable work of sublime visual artistry, and the film more than merits the cinematography award it won at the Sundance Film Festival.

The mountains that dominate the Afghan landscape are brought to life as if by magic, with De Pue’s camera painting spectacular panoramas. These images are contrasted with footage of the nation’s current occupiers as they fire round after round of shells into the mountains. This juxtaposition of divergent ideologies co-existing together adds some much needed context to events, yet there’s still something uncomfortable about the film’s representation of reality. The hypnotic atmosphere De Pue creates by failing to give any background information and instead focusing on mood and feeling leaves a little too much space to ponder how much of what we’re seeing is staged and how much is real. Thankfully, although the film’s heavy reliance poetic visuals diminishes some of the emotional impact, it isn’t enough to distort the clarity of its message.